Rebbe Pinchas of Koretz on Negina 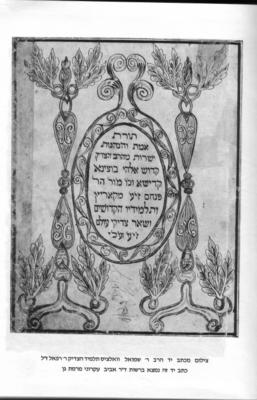 Today is Yud [the 10th day of] Elul, the yahrzeit of Rebbe Pinchas of Koretz, a talmid-chaver of the Baal Shem Tov [founder of Chassidus]. A number of years before his passing, when Yud Elul arrived, Rebbe Pinchas would fast and daven [pray] much longer than usual. He would say, "In the month of Elul, one needs to be more of a Yid [Jew]." No one understood the hint in these words, until several years later, when he passed away on Yud Elul, that he meant he had to to prepare himself for the time of meeting his Maker...

Below are some of his choice sayings about Negina, culled from the sefer Imrei Pinchas HaShalem, [pictured above] as well as from the 'net. Be sure to check out A Simple Jew's post on Rebbe Pinchas as well, which includes a picture of his final resting place.

1. If I could sing, I would not allow You [Hashem] to dwell on High, but rather You would have to dwell with us here.

2. Alone I cannot lift up my voice in song. Then you come near and sing with me, our prayers fuse and a new voice soars. Our bond is beyond voice and voice, our bond is one of spirit and spirit.

3. If I were a singer, I would accept upon myself the duty of traveling from city to city in order to lead the prayers in the various Shuls [synagogues].

4. The nature of the Levites' work was the daily creation of new songs. Also the angels on high create new songs daily, and with the power of the new song they renew each day the miracle of the creation.

5. A town that has menagnim [singers or composers of melodies], has "mochin chadashim" [freshness of thought].

6. He said in the name of the Arizal [Rabbi Yitzchak Luria zt"l], that he [the Ari] attained his lofty stature because he was the shaliach tzibbur [the one who led the prayers], and he sang beautifully. The entire congregation was attached to him through his Negina, and since he was attached to Hashem, he was able to uplift them all up to Hashem.

Comments:
Thanks for the link, Yitz.


have you ever heard some skolen nigunim thay are great

Yes VIN, I've heard them & they are great! I even had the privilege of attending a Tish of the previous Skulener Rebbe ZTUK"L in Crown Heights, sitting within a few feet of him - it was awesome!!!