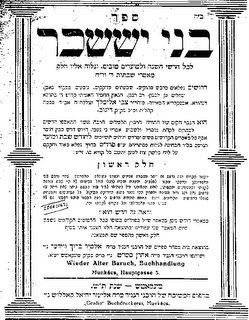 Pre-war [1940] Title Page of the Bnei Yissaschar, published in Munkatch. (Click to enlarge)

We wouldn't be doing justice to the memory of the Bnei Yissaschar without including some stories about him and his music. So without further ado:

When Rebbe Tzvi Elimelech's mother was expecting him, she went to her uncle, The Rebbe Reb Elimelech of Lizhensk, to ask what name to give him.

"You will have a boy, and you should name him Elimelech," was the Rebbe Reb Elimelech's reply.

The woman was astonished to hear this, thinking that the Rebbe was predicting his own demise before the birth of her child (as the custom among Ashkenazic Jewry is to name a child only after people who are deceased).

Noticing her reaction, the Rebbe said, "So name him Tzvi Elimelech," which indeed they did.

After he received the name, the Rebbe Reb Elimelech told her, "If you would have called him Elimelech, all of him would be like me. Now half of him will be like me."

Rebbe Tzvi Elimelech grew up to become a talmid of the Rebbe Reb Elimelech's talmid, the Chozeh of Lublin. Once on a journey to visit his Rebbe, he began to ponder his roots - from which Shevet (tribe) of the Jewish People was he descended? And he wondered, "Why is it that whenever the days of Chanuka come, I feel this tremendous increase of Kedusha (holiness), and a wondrous arousal of pleasantness and sweetness? Surely I cannot be descended from the Chashmonaim (the Hasmonean priestly kings, heroes of Chanuka), for I am not a Kohen! So where do these amazing, special feelings come from?

He decided he would ask his Rebbe, who was known as the Chozeh (Seer) because he could see with Ruach HaKodesh [holy spirit, close to prophecy] "from one end of the world to the other."

Upon his arrival at his Rebbe's home, before he could even ask, the Chozeh pronounced, "Your root is from the tribe of Yissaschar, and the feelings of extra Kedusha that you experience on Chanuka is because you were then a member of the Beis Din [court] of the Chashmonaim." For this reason Rebbe Tzvi Elimelech called his opus, "Bnei Yissaschar."

From the sons of Yissaschar, those with a profound understanding of the times so that they knew what Yisrael should do…

In the sefer Toras HaOlah, the Rama [Rabbi Moshe Isserles] wrote that the Songs the Levi'im sing at the time a Korban [sacrifice] is brought, are like the songs of the Heavenly Hosts above. Whenever a miracle is performed for the Jewish People, where the course of Nature is modified, the Heavenly Hosts cease their Song, and the Jewish People sings. Rebbe Tzvi Elimelech expands this idea as follows.

All of the Heavenly Hosts, the stars, planets and constellations, and all creatures of this World, each of them sings their particular Song according to the qualities they were imbued with by the Creator. The maintenance of all the various forces of Nature depends on their receiving a constant flow of Divine influence and power, uninterrupted. The receptacle for receiving these Divine currents is the unique Song of each one. Therefore, their Song must be uninterrupted...

When there is a miracle where the course of Nature is modified, which causes one of these forces to cease, it automatically follows that its Song also ceases…However, one cannot say that any one of the Songs of Nature completely ceases, and the "Provision of the King" would thereby be lacking…Therefore, the Jewish People, because they are Am Krovo [the Nation close to G-d], make up for the "lost" song by singing Shira.

Finally, regarding actual niggunim that Rebbe Tzvi Elimelech may have composed, we have the following information [with slight touch-ups from me] from Nachman from yesterday's post as well as today's:

At the end of a recently-released [edition] of the sefer "HaRebbe Rav Tzvi Elimelech MiDinov, Pirkei Chayav U'Mishnaso" (Fourth edition, 2005, 2 Volumes; compiled by Rav Nosson Ortner, Rav of Lod), there are a few pages of notations of niggunim composed by the Bnei Yissaschar, appearing at the end of volume two. The Kah Ribon, sung at the Tish of the Rebbes of Bluzhev, Toldos Aharon, and Toldos Avraham Yitzchak - is attributed to the Bnei Yissaschar - and can be heard on the first recording of niggunei Toldos Avraham Yitzchak, called "Azamer."

Following some research,here is the title of the above mentioned sefer.

here is a link to the toldos avraham yitzchok album-azamer
(with audio samples)
www.israel-music.com/efraim_weberman/songs_for_the_shabbat_-_azamer_be_shvochin/

Thanks for this. I attended a wonderful class which offered a biography of the Bnei Yissachara few years ago - I will see if I can find my notes!

the link to the niggunim seems to be broken, if you still have access to those files or could tell me where to find them i'd be most appreciative. pls email mrwpants [at] yahoo [dot] com