The Shabbos of Song and the Song of the Birds
* 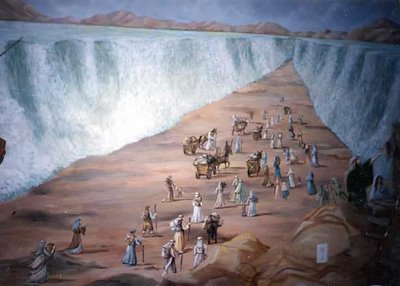 The Sfas Emes on Shiras HaYam

This Shabbos is Shabbos Shira, the Sabbath of Song, for we read Parshas Beshalach, which features the Shiras HaYam – the Song of the Sea, that the Jewish People were inspired to sing as they crossed the Yam Suf - Reed Sea [no, that’s not a typo – suf in Hebrew means “reed”, and it was an earlier typo that somehow it became “red”.]

In addition, last Erev Shabbos, the 5th of Shvat, was the 101st yahrzeit of the Sfas Emes, Rebbe Yehuda Aryeh Leib Alter of Ger, the second Gerer Rebbe. Since we didn’t manage to post something on his yahrzeit, at least a week shouldn’t go by without a Torah from him. So without further ado…

The very first Torah on Parshas Beshalach in the sefer Sfas Emes is from 5631 [1871]. There he brings the Midrash [Shemos Rabba, 23:1] which relates the verse, “Az Yashir Moshe – then Moshe sang” [Shemos 15:1], to the verse in Tehillim [93:2], “Nachon kisacha me’az – Your Throne is from then.” The Midrash explains that even though, “You [Hashem] are from eternity,” Your Throne was not established and You weren’t known in Your world until Your children sang Shira – hence “Nachon kisacha me’az.”

This can also answer another question posed in the Midrash: the verse says “Az yashir - [then Moshe] will sing,” rather than “shar – sang”. Every being has a point through which Hashem’s Glory is revealed. This is the idea of Perek Shira [a Midrash which describes the song of many of G-d’s creatures] – that each creature has a song of praise to Hashem. “Then [Moshe and] the Jewish People sang this Song – that is, the Song that is known to arise from all of the creatures; and the Jewish People caused all of Creation to sing, and to reveal the true point from where they stand – from the Life Force of Hashem that renews Creation daily.

All of this depends on Man’s deeds. When one performs a deed with dveykus [attachment] to Hashem, through the knowledge that all deeds come from the Life Force of G-d, in this manner the deed becomes clear; that is, the hidden aspect [that it’s the person’s deed alone] is removed and the inner part [that it comes from the Divine] is revealed. Thus with the word for song, Shira, we can explain that everything is drawn in a line and row [shura], to the Source which is the Life Force from Hashem. That is, as a result of the Emuna [faith, belief] in Hashem, the Jewish People sang Shira. [The verse preceding “Az yashir,” says “Vaya’aminu BaShem uv’Moshe avdo – they (the Jews) believed in Hashem, and in Moshe, His servant.” Our Sages explain that in the merit of Emuna that they had, they were able to sing Shira, and the Shechina (Divine Presence) rested upon them.] 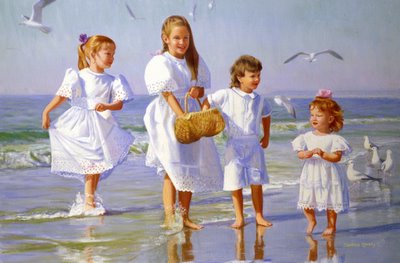 Children feeding the Birds at the Sea (from this website)

There is an ancient Jewish custom [minhag] to feed the birds on Shabbos Shira. I had learned that the reason for this minhag was because they didn't eat the Mon [manna], which is also mentioned in Parshas Beshalach [Shemos, 16:4-36].

However, today my good friend Yosef Ben Shlomo Hakohen sent me the following explanation, which he says is also mentioned in the new edition of the English Mishpacha magazine (page 33). Yosef has a wonderful website called Hazon - Our Universal Vision.

There is an ancient custom of our people during the winter season which expresses our gratitude towards the birds for a benefit which we received from them on our journey to Mount Sinai: There is a winter Shabbos when we read the Torah portion that includes the song which we sung after we crossed the sea, when we were saved from the Egyptian army that was chasing after us in order to enslave us again. This is a joyous song of deliverance, and it also alludes to the future age of universal redemption when all people will accept the sovereignty of the Compassionate One; thus, the song concludes with the words, "The Compassionate One shall reign for all eternity" (Exodus 15:18).

The Shabbos when we chant the Torah portion which includes this song is known as the "Shabbos of Song"; moreover, there is a special custom associated with this Shabbos which involves the birds. I will describe the custom as it is practiced in my community of Bayit Vegan, Jerusalem. Before sunset on Friday, we put out food for the wild birds. "Nefesh Kol Chai" cites Halachic sources which state that the reason for this custom is because the birds also sung a special song when we were delivered at the sea! We therefore express our appreciation to the birds for singing their song by giving them food just before the arrival of the Shabbos of Song; moreover, this custom reminds us of the great joy of the Song at the Sea (Aruch HaShulchan).

May we all be renewed with Faith and Song on this Shabbos Shira!

Yitz: That was great - shavua tov!

Thanks Batya & Jameel for your kind words!