ELEVATING THE SPARKS -- OF A NIGGUN 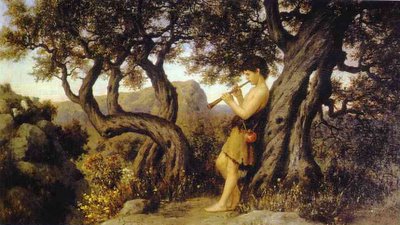 perhaps young Yitzchak Isaac looked something like this
*
"The strains of shepherd melodies evident in the Baal Shem Tov’s music in no way harmed the Kedushas HaNiggun, the sanctity of the melody, for the essence of a niggun, according to Chassidus, is the sound; and if the sound is derived from impure sources, there is a duty to elevate, purify and sanctify it until it is worthy of the responsibility for which it was created…Some of the Chassidic leaders considered it a holy duty to use secular tunes for sacred purposes. Many leaders felt that this was a greater virtue than creating an original melody…

Even the borrowed motifs never remained as they had originally been. They were worked and reshaped into a new form, the form of the Chassid. From this a new melody resulted, born of spiritual Judaism, which became the individualistic melody known as the Chassidic niggun…

The surprising and interesting thing about Chassidic music is that it could take foreign elements of the surrounding cultures and create a unique body of song with its own definite characteristics."

-- Velvel Pasternak, “An Overview of Chassidic Music,” in Melodies of Modzitz, pp. 10-11

While Rebbe Leib Sarahs was in Russia, he sensed that in a certain town in Hungary, there was a lofty soul which had to be cultivated, in order to enable it to reach the level of spiritual growth which its source made potentially possible. He therefore told his wagon-driver to harness his horses in preparation for a long journey. The simple fellow knew from experience that when the Rebbe said ''a long journey," they would no doubt find that the distance was miraculously shortened for them.

And so it was. The driver held the reins until they reached the outskirts of the town, where he handed them over to the Rebbe's charge, and dozed off. Just as in a dream one imagines towns and villages flying by before one's very eyes, so too he could half see the distance of the journey vanishing away before him. When their destination came in sight, the tzaddik roused him, and he resumed control of the reins.

It was dawn when they reached the township they sought, and after morning prayers, the tzaddik went for a stroll in the nearby woods. There he saw a boy of about eight, whose lean frame was only half-clothed with rags and tatters, tending to a flock of geese. The tzaddik struck up a conversation with the little waif, and soon learned that he was the son of a poor widow, whose name he gave. The tzaddik immediately went to seek out the lonely woman and asked her to entrust him with her son. He promised to bring him up, and train him to be a respectable businessman. The widow consented. Before leaving, Rebbe Leib gave her a certain sum for her own sustenance, then set out with the boy for a long journey, to the house of Rebbe Shmelke of Nikolsburg.

When at length they arrived, Rebbe Leib said to his host: “I have brought you a lofty soul whose source in heaven the Heichal HaShira v’Zimra [the Palace of Melody]; I hope that you will make of it [his soul] what it needs to become."

And so the young lad grew up in the home of Rebbe Shmelke, and all the melodies and shepherd songs that he knew, he made holy. The books of Kabbalah explain that all the tunes in the world originate in the Heichal HaNegina in heaven. The Other Side - impurity - knows neither melodies, nor the taste of joy, since it is itself the source of melancholy. Only through the sin of Adam did certain stray sparks fall into the unholy domain of the Other Side, and the task of the tzaddik is to elevate those sparks of melody that have gone astray.

And that is exactly what this little boy who tended geese did with the songs he had known from the woods. He recalled, for example, a song that ran like this:

Forest, O forest, how big you are!

Rose, O Rose, how far you are!
If only the forest were not so vast
The rose would be nearer to me.
If someone would take me
out of the woods
Together, O Rose, we'd be.

And now, lilting to the same melody, this is how he would sing this song:
Exile, O Exile, how long you are!
Shechina, O Shechina, how far You are!
If only the exile were not so vast,
Then the Shechina would be closer to me.
If Someone would take us
out of it soon
Together, O G-d, we’d be.

That inspired gooseherd grew up to be a tzaddik celebrated as a sweet singer of Israel – Rebbe Yitzchak Isaac Taub, better known as the Rebbe of Kaliv.

When Rebbe Naftali of Ropshitz heard the above little song with its beautiful tune for the first time, he declared: “Whenever the Rebbe of Kaliv sings it, all the Worlds above resound; the Source of Mercy is aroused; and choirs of angels of mercy draw near to the Palace on high where Rebbe Leib Sarahs dwells, to do him honor, and they chant in harmony: 'Blessed is he who has brought us this precious soul.' ”
[PS - another version of this story can be found here]
***
NIGGUNIM:
*
The above-mentioned niggun is sung by Kaliv Chassidim to this day, in Hungarian. If anyone has a link to it, please send an e-mail or Comment.
*
An 18-minute playlist of niggunim composed by Rebbe Yitzchak Isaac of Kaliv being sung at his grave in Kaliv, Hungary, can be found here.
*
Or listen to a shorter link, a wedding dance tune, also composed by Rebbe Yitzchak Isaac of Kaliv.
# posted by yitz @ 12:37 PM

Comments:
Yitz: That is a GREAT story.

Here is a story [brought down from the book Gevuras Aryeh] that I found in the Toldos section of the 1995 printing of Degel Machaneh Ephraim:

The holy Rabbi Leib Sarah’s, may his merit protect us, raised in his house an orphan, whom he brought up literally as his own son and was very special in his eyes. He honored him like one of his own sons. Out of his great love for him, he would honor him to lead the congregration in prayer for several years. During that time, the holy light of our Rabbi [the Degel Machaneh Ephraim] and his brother [R' Baruch] began to burn bright and to be revealed. That man, who was raised in the house of the holy Rabbi Leib Sarah’s, was sitting among the Chassidim as they discussed the matter of the new light in Zion and began to laugh at the entire matter. The Chassidim became very angry over this, but because they knew how beloved he was to the Rebbe, they kept silent and kept their pain to themselves. That man did not keep quiet, however, and instead ran straight inside the holiness, and said before his holy Rabbi in a mocking tone, “Behold Boruch and Ephraim are calling themselves Rebbe!” The holy Rabbi did not answer him, but at the evening prayer honored someone else to lead the congregation, and so too the next day. This person understood that he had done wrong, and hurried to ask his Rabbi for forgiveness, but to no avail. He began to scream and cry and plead, stretching himself on the ground, until his holy Rabbi answered him, “Until now you were as dear to me literally as my own son, as I have raised you and brought you up in the ways of God, may He be blessed. But now your heart has filled you to make fun of the holy brothers, about whom I testify that the term found in the holy Zohar ‘guardians of the covenant’ is said about them and those like them. For this reason, from this day on, I have no connection with you, and be careful to place a muzzle on your mouth!”

The man continued to ask for forgiveness and was willing to accept reproach upon himself by traveling to the holy brothers and to appease them. But his request was to no avail, and from then on he was banished from [his] Rabbi’s house forever

The nigun by the Kaliver is called "Szól A Kakás" in Hungarian, and is still sung regularly amond Vizhnitz and Satmar, as well as being one of the most well known songs amongst Hungarian Jews, especially at the Orthodox Kazinczy utca shul in Budapest.

Recorded version can be found on the cassette of Vizhnitzer Zmiros from Jerusalem, and it was also recordfed by the Hungarian band "Muzsikás" on their "Lost Music of Transylvania" CD, also by Di Naye Kapelye on their first CD on Oriente records, as part of a medley of tunes from Szatmar.