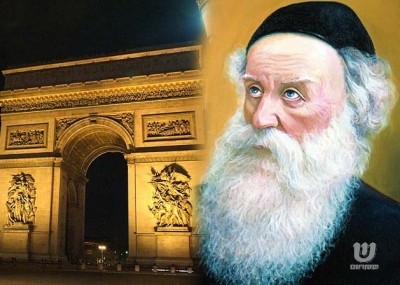 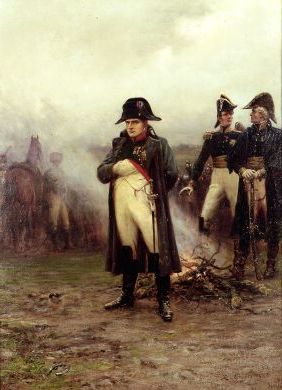 This past Motzaei Shabbos and Sunday, the 24th of Teves, was the 194th yahrzeit of Rebbe Schneur Zalman of Liadi, the Rav Baal HaTanya, talmid of the Maggid of Mezritch and founder of Chabad Chassidus. He is best known for his sefer “Tanya,” the fundamental source of Chabad Chassidus.

We posted twice on his yahrzeit last year: THE Baal HaTanya's YAHRZEIT - THE MASTER OF SONG and Quill of the Soul: Negina of the "Alter Rebbe" of Chabad. Please be sure to read up on them again.

This year, I’d like to present a fascinating account of the Baal HaTanya’s adventures with Napoleon, including the origin of the Chabad-adapted niggun, “Napoleon’s March.” The following is an edited version from various sources that I found on the Web. However, the main source I had found a number of years ago and was unable to relocate it – perhaps it has been taken down. It appears to be from this book: A Day to Recall, A Day to Remember by Sholom DovBer Avtzon. The article has extensive footnotes, some of which I have integrated into the story below. My other sources were Is Judaism a Theocracy? by Yanki Tauber; The Passing of Rabbi Schneur Zalman of Liadi; and Bonaparte and the Chassid.

So without further ado, on to our story.

NAPOLEON’S MARCH:
When the Alter Rebbe heard the marching song of Napoleon's army, he said it was a (song and a) march of victory. He then decided that the song should be used in one's service to Hashem. [On Yom Kippur, before the shofar is blown (at the end of Tefillas Neila), it is customary in Lubavitch to sing Napoleon's March.] We should note that the Alter Rebbe took away from Napoleon his victory march, elevating it for one's service to Hashem, while Napoleon, as related below, was unsuccessful in his tireless attempts to obtain something of the Alter Rebbe's.
You can listen to Napoleon’s March here; or watch a video here.

Rebbe Schneur Zalman’s fears were borne out by the events of the next two centuries. When emancipation did come to European Jewry, it came as a gradual process, and the traditional Judaism had by then developed an array of intellectual and moral responses (most notably, the Chassidic and Mussar movements). Still, the spiritual toll of freedom was high: traditional Jewish life was all but wiped out in France and Germany by the upheavals spearheaded by the French Revolution, and while it persevered in Eastern Europe until the eve of the Holocaust, many fell prey to the winds of anti-religious "enlightenment" blowing from the west. We can only imagine what the toll might have been had Napoleon conquered the continent in the early years of the nineteenth century.

Shortly before his passing (by one account, "after Havdala, several minutes before giving up his soul in purity to G-d") the Rebbe penned a short discourse titled, "The Humble Soul."
"For the truly humble soul," Rabbi Schneur Zalman wrote, "its mission in life lies in the pragmatic aspect of Torah, both in studying it for himself and explaining it to others, and in doing acts of material kindness in lending an empathizing mind and counsel from afar regarding household concerns, though the majority, if not all, of these concern things of falsehood.... For although the Divine attribute of Truth argued that man should not be created, since he is full of lies, the Divine attribute of Kindness argued that he should be created, for he is full of kindnesses... And the world is built upon kindness."

Zechuso Yagein Aleinu v'al Kol Yisrael - May his merits protect us all!

CX - Thanks for stopping by & taking the time to read it!
Anon - There's contradictory dates given on the Chabad website, some articles have 1812, others 1813. However, 1813 makes more sense to me, as the Rosh Hashana mentioned in the article was 5573, and 24 Teves usually [if not always] falls in January. So I've corrected it.
EVERYONE - check out this link of this year's trip to: Haditz [where the Baal HaTanya is buried] & other kivrei Tzaddikim.

very good! i have your blog in RSS feeds.

if possible, can you provide where this particular part is from, where Mitteler Rebbe writes it?
"The Mittler Rebbe wrote: "On Erev Rosh Hashana, my father, the [Alter] Rebbe, confided to me: 'I am extremely pained and worried about the battle of Mazaisk [in history books it is referred to as the battle of Borodino], since the enemy is becoming stronger and I believe he [Napoleon] is also going to conquer Moscow.'"

Phoenix Mom - Thanks for stopping by. The footnote says it was a letter to R. Moshe Meisels. "This letter is printed in Sefer HaToldos of the Alter Rebbe, pp. 1031-41."

This comment has been removed by a blog administrator.

Curious - Outside of Chabad sources, is Napoleon's March recorded elsewhere?