Melody in His Soul – The Dancing Man

In honor of Yom Yerushalayim (Jerusalem Day), I am privileged to present an excerpt from the virtual pen [keyboard] of a good friend, Moshe Kempinski, who has a wonderful website called Shorashim (Gift Shop) and Shorashim Learning Center.

Everything changed in a flash of Divine intervention. "You turned my mourning into dancing for me; You loosened my sackcloth, and girded me with gladness" (Tehillim 30:12). It was then that I heard the recording that shifted the world and changed my life.

(You can hear that recording, with much of it translated into English on the page, here. A few highlights are below as well.)

The Kol Israel (Israel Radio) microphones held by the Israeli war correspondents were picking up the voices of battle and the commands and instructions of the commanders...
Then the microphones pick up the following voices. Amidst intermittent bullet fire one hears General Uzi Narkiss asking breathlessly, "Tell me, where is the Western Wall? How do we get there?"
Israeli radio correspondent Yossi Ronen continues with following hesitant and breathless words, "I’m walking right now down the steps towards the Western Wall. I’m not a religious man, I never have been, but this is the Western Wall and I’m touching the stones of the Western Wall," and his voice trails off into a silence of awe.
In the background one could hear hoarse voices of battle weary soldiers screaming, "Shehechiyanu v’kiyimanu v’higiyanu lazman hazeh -- Blessed are You, L-rd G-d, King of the Universe, Who has sustained us and kept us and has brought us to this day." As Yossi Ronen and others answer "Amen," Rabbi Shlomo Goren, the Chief Rabbi of the army, declares, "Baruch ata Hashem, menachem Tzion uvoneh Yerushalayim (Blessed are You, who comforts Zion and builds Jerusalem)," and again a loud and hoarse "Amen" is heard. At that point some of the soldiers begin to sing Israel's National anthem, ‘HaTikva,’ next to the Western Wall…
Rabbi Goren, blowing the Shofar at the Kotel in 1967
*
A loud and tearful "Amen" is heard. Shots continue to be fired and soldiers continue to weep as Rabbi Shlomo Goren blows the shofar he has brought with him with mighty and crystal clear sounds. He then ends with the declaration, "L’Shana HAZOT b’Yerushalayim hab’nuya, b’Yerushalayim HaAtika! This year in a rebuilt Jerusalem! In the Jerusalem of Old!"
That shofar sound was the most dramatic thing I had ever heard in my young life at that point and I felt that call in every fiber of my body. I felt the earth and everything I had known shift underneath me and suddenly things were crystal clear and pure. The shofar began a melody in my soul that would not allow itself to be quelled. I knew then like I hadn't really known anything before that time, that I would, one day be able to call myself a Jerusalemite. Nothing was clearer and nothing was more imperative.
It took too many years but I fulfilled the beginning of my vow (the rest of the vow included being able to dance with all my family in the Temple courtyards). The melody of that shofar blasts resonates in my soul every day I walk into the Old City of Jerusalem. It is that melody that seems to anchor my soul in the vision of what could be, what will be and what has already begun to be.
Without that melody I fear I too would be drawn into the dark gloom of what hasn't yet come into being. It is so easy to see the cracks and the fissures of the Divinely-inspired edifice that is being constructed brick by brick in our days. Only with that melody resonating in one's soul one can step back and see the splendor of that which is being formed in our lifetime.
It is so tempting to decry and bemoan the fact that the builders of this edifice are not imbued with the awe and the vision of what is being constructed. Yet with that melody in one's heart one begins to see that regardless of the blindness of the builders they continue to build. More importantly, when they tire and become an obstacle, others with clearer vision take their place.
It is only with that melody that one can withstand the misguided and evil intentions of those who are too deaf to hear and as a result place obstacle after obstacle before the path of redemption, abusing, imprisoning and expelling those on the very path.
It is also a melody that gives one the strength to ignore the derision of all those whose spiritual Torah connection should have given them the ability to dance with the music but a long history of exile and persecution has made them unable to recognize the very melody they have been waiting to hear. 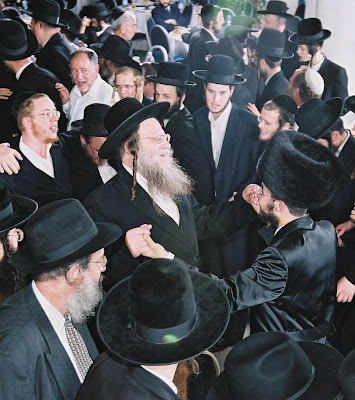 The Modzitzer Rebbe Shlita, dancing with a Chasan a few years ago
*
It is that melody that animated and led the dancing man I witnessed several years ago in the main square in the Old City of Jerusalem. In preparation for the tens of thousands of people who were going to be dancing through all the gates of the Old City on Jerusalem Day, a music and record company had set up a booth outside of our shop. Their speakers were playing Jewish Chassidic music throughout that whole Jerusalem Day.
Early in the day I saw an older man walking across the square and stop when he heard the music. He turned to two strangers who were walking in the same direction, grabbed their hands and started dancing with them. They danced but soon left him, yet he continued to dance alone. Very quickly several other people joined him in a circle. When they eventually left he continued to dance on his own until he was joined by others. When one disc had ended and there was a pause before the next music disc was put on, he still continued to dance. It was obvious that the melody he heard was not coming from the speakers. A group of young secular children walked by and smiled at the dancing man. He beckoned to them to join him and they hesitated. They did not hesitate for long as they probably saw the melody burning in his eyes and another circle began to form.
Within minutes a group of young soldiers joined in and the circles became larger and one circle formed within another one. The dancing man continued to sway and dance in the middle. Everybody he touched or danced with him left the encounter a little bit changed. Even those who did not join but preferred to watch or dance from a distance heard the very same melody that had captured this dancing man's soul. It was a melody exuding from every move of his feet and sway of his upturned arms. The dancing man continued alone or in circles with others for a very long time.
Finally, when the first wave of marchers came through the Jewish Quarter on their way to the Western Wall, he was swept up with them, lost in the flowing blue and white flags. I followed him for a part of the way until he became enveloped by the growing joyful crowd. Yet he never stopped dancing.
The melody that began in the mighty blast of the Shofar at Mount Sinai and that I heard from the shofar of Rabbi Goren forty years ago and that ran through the soul of this dancing man was the very "song of Hashem."
As the Psalmist writes in Tehillim 137: "How shall we sing the L-rd's song (the song of Hashem) in a strange land? If I forget you, O Jerusalem, let my right hand lose its strength. If I do not remember you, let my tongue cleave to the roof of my mouth; if I don't prefer Jerusalem over and above my chief joy."
It is a song that cannot be sung in a "strange land," and at times is forgotten. Yet those that have not forgotten the melody will find themselves drawn back to the land of their forefathers and brought up into the Gates of Jerusalem. "I was glad when they said to me, 'Let us go to the House of Hashem!' Our feet are standing within your gates, O Jerusalem." (Tehillim 122:1-2)
Those that hear the melody will continue to withstand the abuse and obstacles raised by those that are deaf to the melody. Those that dance to the melody will continue ignore the ridicule of those that after so many years of exile have forgotten how to recognize the melody that even they themselves hear it. On this Jerusalem Day we will be singing the song of Hashem in that "City that has been reunited" (Tehillim 122:3), and we will dance to that melody even though we are very aware that the dance has just begun.
*
Yom Yerushalayim Sameach - May we soon see Yerushalayim completely rebuilt, with the Beis HaMikdash (Holy Temple)!
# posted by yitz @ 11:02 PM

Comments:
Amazing story. Makes me want to be back in Yerushalayim. Sigh.

How lovely, a story of hope. We need a "dancing man" to lift us up.

Thanx, Dix & Batya, for stopping by! And yes, we need more dancing men like that, with a melody in their soul.