The Patience of the Maharal 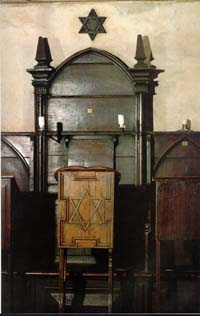 This Shabbos, the 18th of Elul, is the 398th yahrzeit of the great HaRav Yehuda Loew [Leib], better known as the Maharal of Prague.
The Maharal was one of the most seminal thinkers in the post-medieval period. He developed an entirely new approach to the Aggada of the Talmud and it is likely that no previous author devoted so much space to the interpretation of the non-Halachic thought of the rabbis of the Talmud.
He was held in great esteem by his contemporaries and has had a profound impact on all streams of Judaism. Rabbi Kook stated that the "Maharal was the father of the approach of the Gaon of Vilna on the one hand, and of the father of Chassidus, on the other hand." He has been described as a Kabbalist who wrote in philosophic garb.
The Maharal castigated the educational methods of his day where boys were taught at a very young age and insisted that children must be taught in accordance with their intellectual maturity. Thus, Talmud and certainly not Tosfos should be introduced only when the child is developmentally capable of fully comprehending what is being taught. He recommended that the system proposed in Pirkei Avos be followed.
Amongst his talmidim were the Tosfos Yom Tov, the Kli Yakar, the Tzemach David and R. Eliyahu of Lontz, known as R. Eliyahu Baal Shem.

The following story has been excerpted from this week’s English weekly HaModia, with a small supplement from an excellent biographical sketch by Ben Zion Bokser at Wellsprings.


The Patience of the Maharal
When Reb Shmuel Shmelke Reich of Worms, who was great both in Torah and in worldly affairs, being wealthy, esteemed and close to the king, entered his daughter Perel into an engagement with the Maharal. Reb Yehuda was only fifteen years old. For the three years until the wedding, Reb Shmelke sent his future son-in-law to learn under the Maharshal in Przemysl, but in the meantime, the future father-in-law lost much of his fortune.
When the Maharal turned eighteen, Reb Shmelke wrote to him, explaining that he could not live up to his dowry obligations, and therefore he was releasing the Maharal from any obligations toward the engagement. If the young man wished to marry someone else, he was free to do so. The Maharal wrote back that he was not interested in going back on his word, and that he hoped Reb Shmelke would be helped from Above. However, if the father did not wish to keep his daughter waiting until he should regain his wealth, he should find her another shidduch [match], and then the Maharal would know he was free.
The mechutan [father-in-law to be] remained poor, so much so that the Kallah [fiancee] opened a small bakery to help her parents. And so she stayed single for ten years. The Maharal likewise did not marry. He sat and learned, and thus earned the title Reb Leib Bachur. About the Maharal during those years, the Rema, HaRav Moshe Isserles, quoted the pasuk [verse], "Harimosi bachur me’am, matzasi David avdi -- I have raised a young bachur (i.e., unmarried man) from the people, I have found David my servant (Tehillim, 89:20), for he was descended from David HaMelech.
A war sprang up after those ten years and the advancing armies marched through Worms. As a cavalryman among the rear guard rode past the open window of the Kallah’s shop, he pierced one of her loaves with his spear. Perel ran after him, crying out not to steal from a poor girl who was supporting her elderly parents. The rider called back, "What can I do? I have no money and I am very hungry.'' But then he offered her one of the two saddles he was sitting on, and tossed it roughly into her shop.
When Perel went to pick up the saddle, she saw gold coins peeking out of the split seams. She ran to tell her parents of their good fortune, and how Hashem's salvation had come, and her father immediately wrote to the Maharal to come and marry her, since Hashem had miraculously helped them cover the dowry and pay for the wedding.
The marriage finally occurred in 1544. Bride and groom, according to the Loew family chronicler, Meir Perles, were then 32 and 28 years old respectively. Their marriage was a very happy one, and they were blessed with seven children, six daughters and a son.
One of the Maharal's sons-in-law, Rav Yitzchak HaKohen Katz, later noted that his father-in-law had always refused to join a beis din asked to break off engagements because of defaulted dowries. When such cases arose, the Maharal always tried to persuade the parties to maintain the engagement. If that failed, he sent them to other Dayanim [judges].
Zechuso Yagein Aleinu - May the Maharal's merits protect us!
# posted by yitz @ 12:44 AM

Thanks for the stories.

Yes SB, I am well aware of this, as I have posted on this in the past. Here's a link to last year's post.

I have heard that Rosh Chodesh Elul is the birthday of our Ovos, Avrohom, Yitzchok and Yaakov.
This is news to me.
Can you please clarify?
"Ono z'chus ovos labonim tizkor!"
With prayerful wishes for a Shono Tovo u'M'suko.

Anon - never heard that. I heard that Yitzchak was born on Pesach.