A Man of Truth Becomes a Rebbe 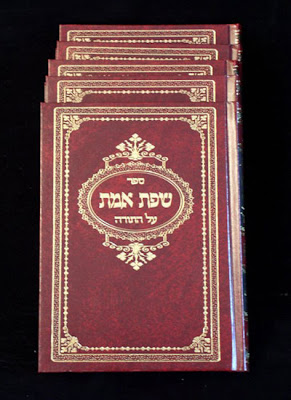 This Shabbos, Heh [the 5th of] Shvat, is the Yahrzeit of HaRav HaKadosh Rebbe Yehuda Aryeh Leib Alter, better known as the Sfas Emes, the second Gerer Rebbe. [We previously wrote about him here].
*
He was the son of R. Avraham Mordechai zt"l, who was the eldest son of the Chiddushei HaRim [the first Rebbe] of Ger. He was born on Erev Rosh Chodesh Iyar 5607 (1847), and as a boy of only two, he was orphaned of his mother. When he was about nine years old, his father was also niftar [passed away], and he was brought up by his holy grandfather who treated him as a son, even rebuking him when necessary.

Once when the young boy came late to shiur [a Torah lesson], the Chiddushei HaRim rebuked him publicly, which he accepted in silence. His friends, who knew that he had been up all night learning, asked him why he did not tell his grandfather so. "It wouldn't have been worth forfeiting my grandfather's rebuke," replied the boy.

After his bar mitzva, he married the granddaughter of R. Baruch Tam, and continued living in Ger with the Chiddushei HaRim.

Upon the petira [passing] of the Chiddushei HaRim in Adar 5626 [1866], most of his Chassidim crowned Rebbe Chanoch Henach of Alexander as their Rebbe. A minority went over to Rebbe Avraham of Chekhnov. At the tender age of 18, the young R. Yehuda Leib was appointed Av Beis Din of Ger, in place of his grandfather. Some of his grandfather’s Chassidim, including some of the prominent elder ones, wanted to crown him as their Rebbe, but he wouldn’t hear of it. In addition, his grandmother, the widowed Rebbetzin, could not bear the thought of anyone taking the seat of her late husband as the Rebbe. The Sfas Emes wavered for several months, until he finally opted to join the Chassidim of Alexander.

Four years later, Rebbe Chanoch Henach was on his deathbed, and he sent a letter to young R. Yehuda Leib, summoning him to come. Along with thousands of others, the Sfas Emes came to Alexander. On his last Shabbos, the Rebbe remained in his room near the beis medrash, bedridden. Rebbe Avraham of Porisov told the following: "The Alexander Rebbe instructed how to give out the aliyos to the Torah. I knew that the one who would receive Shishi, the sixth aliya, would be designated as his successor. I had good reason to believe that I would be chosen. When they came to Shishi, I fastened my gartel, and accepted the mastery of the Gerer Rebbe."

On 18 Adar 5630, Rebbe Chanoch Henach of Alexander passed away. Young Rebbe Yehuda Aryeh Leib returned to Ger, followed by thousands of Chassidim. No one asked him if he accepted this position or not, there was no hesitatation. The entire congregation of Alexander Chassidim accepted the mastery of the young Rebbe by an overwhelming majority. Only a few went over to Rebbe Avraham of Sochatchov, the Avnei Nezer.

But the young Sfas Emes did not accept this so readily. R. Tzvi Hersh, one of the elder, prominent Chassidim who had been the right-hand man of the Kotzker Rebbe [the Rebbe before the Chiddushei HaRim], came to the new Rebbe. The Sfas Emes asked him why didn’t he become the Rebbe?

"What do you want from the Chassidim? They should crown a Rebbe with a sefer Tehillim [Book of Psalms] in their hand, praying that he should live?" was the reply.

When the Piltzer Rav, R. Pinchas Eliyahu came in, the Sfas Emes complained, "Both my grandfather and the Alexander Rebbe were left to their latter years till they became Rebbes. I’m just starting out [my life], and I’m already closed in from all sides?"

The Piltzer Rav answered, "Even a Rebbe has to accept the Divine decree, and the 'suffering' of a Rebbe with love."

The Chassidim would not relent, and on Shavuos a huge throng arrived in Ger. The young Rebbe came into the Beis Medrash, filled from wall to wall with Chassidim, and said, "If I can’t keep you from coming, then we should strengthen each other, in friendship." But when he saw Rebbe Avraham of Porisov, he told him, "If you’re here, I’ll learn a bit from you, and you from me."

Upon the death of his grandfather, the Chiddushei HaRim, Rebbe Yehuda Leib was very careful not to sit in his seat, as mentioned above. This continued even after he became the Rebbe in Ger - he would sit in the middle of the table with the Chassidim. In fact, his successors - the Imrei Emes and the Beis Yisrael - continued this practice.

In addition, he refused to wear the special garments of the Rebbe – special hats [one for weekday and one for Shabbos] and a white silk bekeshe [long Chassidic coat] for Shabbos. The latter his grandfather had given him, but he only wore it to his chasuna [wedding]. Once more, the Porisover came to him and said, "If you are small in your own eyes, yet you are the head of the Jewish People. The Chassidim want their Rebbe to wear the special clothes, for the honor of this great house, his grandfather, our Rebbe, and his predecessors…"

"Your prayers have accomplished half," was the Rebbe’s response. Indeed, the Sfas Emes did wear the special Rebbishe hats; but on Shabbos, he did not wear the white garments…

Although he conducted a Tish that Shavuos, he still did not say divrei Torah in public until Sukkos of the following year. Finally, when he started giving forth his pearls of Torah wisdom, the world was astounded. These divrei Torah were printed in his famous sefer, Sfas Emes al HaTorah. His sefarim on Shas were also printed many times.

Some time later, after the original beis medrash had burnt down and a new one was built in its place, the Sfas Emes asked one of the Chassidim to make a sign, stating the purposes of the beis medrash. The Chassid had a sign printed: "This Beis Medrash is for Torah, Tefilla [prayer] and Chassidus." When the Sfas Emes saw this, he instructed him to remove the word "Chassidus" from the sign. He explained: "Someone is liable to come here and chat. If anyone criticizes him for this, he’ll say that he was speaking matters of Chassidus…" 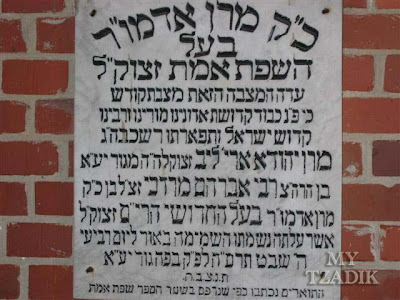 The tombstone in Poland
*
One of the central items in the Gerer tradition is known as 'the Kotzker Kvittel', which was sent by an elderly Chassid, R. Yaakov Yitzchak of Wolotchlabek. R. Yaakov Yitzchak was a Chassid of Kotzk, of the Chiddushei HaRim, of Rebbe Chanoch Henach of Alexander, of the Sfas Emes, and of the Imrei Emes. In the year 5665 (1905), after the Sfas Emes had passed away, the elderly Chassid went in to see the new Rebbe, the Imrei Emes, handing him a long kvittel [note] packed with memories of the time he spent in the presence of various Rebbes.
*
The following excerpt about the Sfas Emes was taken from that famous kvittel:
*
" . . . What can I possibly say? I went to Ger over one hundred times over the course of 35 years. I heard much Torah from him. Most of what I understood I understood with ease and what I did not understand, not only did I not fully comprehend what he meant, but I did not even begin to comprehend what he meant, for all who had eyes to see and a heart to understand realized the Shechina [Divine Presence] was speaking through the throat of this tzaddik. His words were very deep; innermost secrets hidden away and anyone who claims to be able to grasp his holy words - with the exception of a few select individuals - is mistaken.
*
" . . . Everything I was able to grasp on my first journey to visit his father, Maran Hakodesh [the Sfas Emes] z"l - on my second journey I realized on the first journey I had grasped nothing, and the same on the third journey, etc., etc. When I would arrive home every year I became aware, over the course of the year, that my previous visit was nothing . . . "
*
***
*
Sfas emes tikon la’ad – the lips of truth are established forever. With these words, the holy Sfas Emes left this world, on 5 Shvat 5665. Zechuso yagein aleinu v’al Kol Yisrael - may his merits protect us all!
# posted by yitz @ 1:06 PM