WHY ARE YOU STARING AT ME?

Tonight and Thursday, 17 Shvat, is the 152nd yahrzeit of Rebbe Yechezkel of Kuzmir, one of the leading talmidim of the Chozeh of Lublin, and the Avi HaShosheles [founder] of the Modzitz Chassidic dynasty. The first Modzitzer Rebbe, the Divrei Yisrael, was his grandson.

You can find out more about him here, in our previous post: Rebbe Yechezkel of Kuzmir, founder of the Modzitz Dynasty. The following story is reprinted here with permission of the Modzitz website.
*****
WHY ARE YOU STARING AT ME?
At the yahrzeit Tish of Rebbe Yechezkel of Kuzmir held by the third Modzitzer Rebbe, the Imrei Aish Zt"l on 17 Shvat 5740 [1980], the Rebbe asked one of the Chassidim, R. Yitzchak Lipa Fishbein, to tell the following story. Then he said to him, "Stand up, this is Torah, this is Torah, this is Torah." This story comes to Modzitz via R. Elazar Gewirtz, a mekubal [Kabbalist] who lived in Yerushalayim and was present in Kuzmir when it occurred…
* 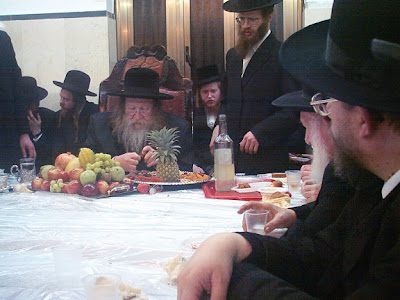 All eyes on the Rebbe. The Nachalas Dan Ztvk"L at the Kuzmirer Tish in 5765

does anyone know about R eliezer gewirtz mentioned in the stotry