A CROWN FOR HASHEM

Adapted from my previous post, Rebbe Shmuel Eliyahu of Zvolin - Bearer of Warning:
*
This Shabbos, the 26th of Iyar, is the 120th yahrzeit of Rebbe Shmuel of Zvolin, son of Rebbe Yechezkel of Kuzmir, and father of the first Modzitzer Rebbe, the Divrei Yisrael.Upon the passing of Rebbe Yechezkel [Chatzkaleh] of Kuzmir Zt"l, his son Rebbe Shmuel Eliyahu was called upon to lead the Chassidim. Rebbe Shmuel Eliyahu lived in Zvolin, Poland.
From his youth, he was outstanding in his Torah scholarship and his musical abilities. He was called a "Menagen mafli pla'os", a wondrous musical talent. When he davened before the amud in his father's Beis Medrash, the place shook. People then said that they experienced the meaning of "and the entire nation saw the sounds" [a description in the Torah to describe the giving of the Torah].
The Zvoliner Rebbe composed many niggunim, especially for Shabbos and Yom Tov that were known throughout Poland and attracted many people. He was the first of the Polish Tzaddikim to concentrate his creative powers in Negina. With his awesome memory, he was able to remember everything he composed. His attitude towards Negina was as if the singer were standing in the Beis HaMikdash, and the Leviim were accompanying him in the shira v'zimra.
***
Here is an insight from the Zvoliner Rebbe Zt"l, in honor of his Yahrzeit:
* 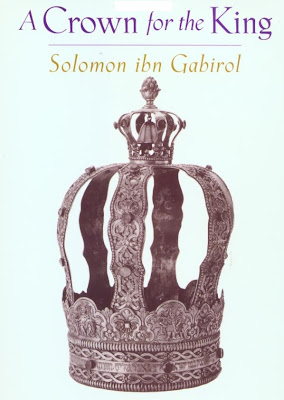 It is told that when Rebbe Shmuel Eliyahu of Zvolin Zt"l met with another tzaddik of his time, he said, "When two tzaddikim meet, they create a crown for the Almighty, Blessed be He."

He reasons this by citing a Mishna in Masechta Uktzin: "Rabbi Yehoshua Ben Levi said, 'In the future, the Almighty, Blessed be He, will cause the tzaddikim to inherit three hundred and ten worlds.' "

My thanks to Reb Moshe of I Love Torah for this video. His description:

An Appreciation of Song and Dance

Tonight and tomorrow is the 17th of Iyar, and the Yahrzeit of the Baal Shem Tov’s grandson, Rebbe Moshe Chaim Efraim of Sudylkov, known for his sefer, the Degel Machaneh Efraim. [The full text of the sefer can be found here, in PDF format.]

Be sure to read my previous posts, if you haven’t already:
Rebbe Moshe Chaim Ephraim of Sudylkov - A Simple Jew
LEV HA'OMER - REDEMPTION THROUGH SONG!

The following is part of a response of the Baal Shem Tov, to one of his closest Talmidim, Rebbe Yaakov Yosef of Polnoye, the "Toldos." It is taken from the sefer Sarei HaMeah, who quotes the sefer Degel Machaneh Ephraim [Parshas Yisro]. He was explaining to the Toldos the significance of song and dance.

"Believe me, my honored friend, that in the same way that our Sages say [Brachos, 3b] that a 'harp hung over the bed of King David, and when midnight arrived, a north wind would blow and the harp would play by itself.' So too, there is a north [hidden] wind [spirit] within me, and when I wander among the hills and mountains, fields and vineyards, and see the vast expanse of G-d’s Creation, that north wind / hidden spirit blows through my limbs and I sing on my own - I chant praises to the L-rd Above for such a wonderful world!

"Of course, this takes a special sensitivity that not everyone is blessed with. You may understand this better with the following parable: 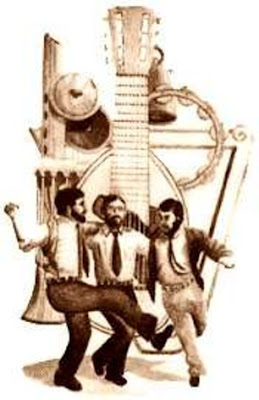 There was a musician who played his instrument beautifully, full of sweetness and pleasantness. Whoever heard his tunes could not contain himself; he was impelled to dance fervently to this great music. Whoever was closer to the musician, would draw himself even closer, had the greatest pleasure, and would dance most fervently.

In the midst of this crowd of people there was a deaf man. He could not hear one note of the music, but he saw the people dancing with intense fervor. He looked upon them as if they were crazy, and couldn’t understand what all the fuss [joy] was about.

But in truth, if were truly wise enough to understand that the people were dancing because of the intense pleasure they derived from hearing the music, he too, would dance with them.

A Fiery Love of the Land 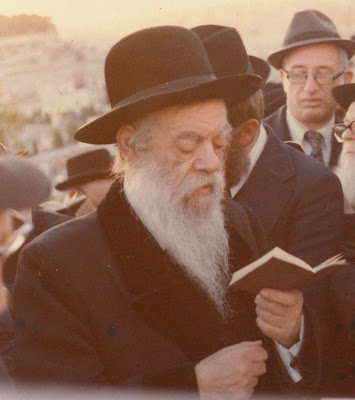 Tonight and tomorrow, 4 Iyar, is the 24th yahrzeit of the third Modzitzer Rebbe, Rebbe Shmuel Eliyahu Taub, known as the Imrei Aish [Sayings of Fire]. Ostensibly, this appellation comes the first letters of his name - Shmuel Eliyahu - the Shin and Aleph comprising the word Aish. But perhaps there’s a deeper meaning here as well.

For a lot more about this Rebbe, see my previous posts:
Yahrzeit of the Imrei Aish 5767
The Advantages of Negina
Scenes from the Yahrzeit Seuda
***
In 1935, the Imrei Aish accompanied his father, the saintly Imrei Shaul, on a trip from Poland to Eretz Yisrael. It was in the month of Iyar, the day before Lag B'Omer. The very next day, they went to Meron, where Rabbi Shimon bar Yochai is buried - and Lag B'Omer is his yahrzeit. There they met various Chassidic Rebbes and other Rebbeim, and this visit made a lasting impression on young R. Shmuel Eliyahu. Later on this trip, they met with many other Gedolei Yisrael. The trip lasted close to three months, and on Shabbos Chazon [right before Tisha B'Av] they were guests in the Old City of Yerushalayim. On the night of Tisha B'Av they made their way to the Kosel [Western Wall], accompanied by throngs of people.

This trip so affected the Imrei Aish, that when his father told him he was ready to return home to Poland, he asked his permission to remain in Israel: "Eretz Yisrael has found favor in my eyes. I will dwell here, for I have desired it" [see Tehillim, 132:14]. The Imrei Shaul, who also had a great love for Eretz Yisrael, immediately agreed. A year later, his Rebbetzin and their only son, the "Nachalas Dan", made Aliya to Israel as well. In that year [1936], the Imrei Aish was chosen for a position on the Tel Aviv Rabbinate.

It was also in that year that he composed his first niggun. His father [the Imrei Shaul] made yet another visit to Eretz Yisrael two years later. At the Tish, the Rebbe asked his son [R. Shmuel Eliyahu] to sing "Kol Mekadesh." He sang his first niggun, and the Rebbe learned it immediately. Upon his return to Poland, he sang it often, telling his Chassidim, "I have brought you fruit from the Land of Israel - my son's first niggun." Even upon his flight from the Nazis [ym"sh], Rebbe Shaul continued to sing this niggun very frequently.

The Imrei Aish lived the entire period, from his Aliya in 1935 until his petira [passing] in 1984, in Tel-Aviv. He saw his living in the heart of central Tel-Aviv [his last location there was on Dizengoff St.] as a mission. After many other Chassidic Rebbes had moved from Tel-Aviv to Bnei Brak, he was asked why he didn’t do so as well.

"They don’t need me there," he answered with a smile. "In Bnei Brak, there are dozens like me." Indeed, his smile and warm demeanor affected every one who entered his Beis Medrash. On a typical Yom Kippur, while the Imrei Aish intoned the Kol Nidrei prayers, one could see actors from the Bima theater davening next to bearded Chassidim; famous singers and musicians alongside yeshiva bachurim and avreichim [young men]. One did not need a black hat, a bekeshe [Chassidic coat], or even a beard to be warmly received by this amazing Rebbe, whose heart and soul were open to all who came.

As we described previously: Carefully balancing the emotional overflows from the Holocaust and the new State, with the deeply rooted values of Agudist-Polish Chassidic Jewry, the Imrei Aish earned the love and respect of all kinds of Jews, from all walks of life. The Modzitzers who survived or fled Europe flocked to him, as did hundreds of others who found his home and guidance an Ir Miklat (City of Refuge) from which to rebuild their own lives. To this very day, one sees on any given Shabbos by the Rebbe Shlita’s Beis Medrash heads covered with hats, spodiks, kippot srugot, streimlach, and even some hastily donned kippot, all by people who definitely consider themselves Chassidei Modzitz... talmidim of Rebbe Shmuel Eliyahu zt"l.

And finally, from an earlier post, but worth repeating:
In regard to Israel’s soldiers, it is proper to relate what his son, the Nachalas Dan, wrote: "I recall that during the Six-Day War, there were young men who were called up to go to the War in the middle of the night. When they returned, they told me that they took a tally, and whoever went into the Rebbe [his father, the Imrei Aish] for a blessing before departing for the War, returned unharmed. Hashem should bless us, that just as he [the Imrei Aish Zt"l] protected us in his lifetime, he should do so now."