This Shabbos is the 13th of Elul, and the 132nd yahrzeit of Rebbe Yaakov Yisrael of Cherkassy, one of the eight sons of Rebbe Mordechai of Chernobyl, and ancestor of the famous American Twerski family [of the Hornosteipel dynasty].

Previous posts: The Cherkasser and Saving Souls and
Rebbe Yaakov Yisrael of Cherkassy - and Twerski niggunim

The following story was translated from the sefer, "Admorim L'Beit Sanz", by R. Avraham Yitzchak Bromberg. An added feature of the story is that it includes the Cherkasser’s grandson, Rebbe Mordechai Dov of Hornosteipel, whose yahrzeit is just over a week later - 22 Elul.

One day in the year "Kesser" [crown], 5620 [or 1860], Rebbe Yaakov Yisrael, one of the "eight candles of the Menora," as the eight sons of Rebbe Mordechai of Chernobyl were known, had his household items packed up, and announced, "We are moving to Cherkassy." As the news circulated, the town of Hornosteipel was full of commotion. How could this be? After thirty years, all of a sudden the Rebbe is packing up and leaving us?
The town's elders and leaders went to the Rebbe to try to dissuade him from his plans. When all words failed, they began to beg him: if the Rebbe leaves, not only will his spiritual influence be missing, but their source of livelihood will dry up as well. For in these thirty years, most of the Jews earned their living from the Chassidim who came to visit the Rebbe. Now, what would they do?
But can one really comprehend the depths of the Rebbe's intentions? Only he is aware of this. If he has decided to leave Hornosteipel, it must only be because the people have sinned, and no longer deserve his presence amongst them. Now, they must absorb their punishment and shame. Amidst cries and wailing which pierced the Heavens, they escorted their Rebbe out of town.
An eyewitness to that bitter day described it: "That day will forever be etched in my memory as one of tragedy, which I'll never forget. It was an awesome sight to see the Rebbe and his family leave town, and all of us - men, women and children - escorting him whilst crying and wailing. The cries were heard in the neighboring towns, until even the Gentile farmers came out and joined the escort of the holy Rabbi. We escorted the Rebbe's wagon for several miles, crying, until we reached the river bank and could continue no longer." 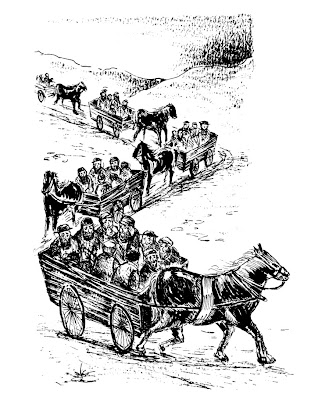 "Then the Rebbe stood up in his coach, turned to us and said, 'I promise you that Hornosteipel will be neither embarrassed nor shamed.' We understood these words only three years later..."
After settling in Cherkassy, many of the Chassidim began to come there. Hornosteipel emptied out, its roads forsaken. Three years passed. The Rebbe's grandson, R. Mordechai Dov, who accompanied his grandfather to Cherkassy [he lived with him after his parents died], was totally absorbed in his Torah learning...
In the year 5623, Rebbe Yaakov Yisrael of Cherkassy fell ill and was bedridden. His youngest grandson, R. Mordechai Dov, was at his bedside day and night, out of his great love for his grandfather.
One day before daybreak, the Rebbe sat up in his bed and said to his grandson, "I'm not really sick. The doctors don't know what they're talking about. I know more about myself than they do. Just like one has 248 physical limbs, he has a similar amount of spiritual ones. When one harms a 'spiritual limb,' it affects the physical one as well, and that's what we call 'sickness.' I began to contemplate; perhaps I have harmed a spiritual limb. I was informed from Above that I have harmed my connection to the Oral Law - Torah she'baal Peh - and I have therefore undertaken to learn 18 chapters of Mishna a day, between Mincha and Ma'ariv." With that, he got out of bed.
Then he continued, "My son, your time has come to be a Rebbe, and your place is Hornosteipel. It is time to leave me and to take your rightful place."
Bursting into tears, R. Mordechai Dov responded, "But I'm so young, how can I take on such an awesome task?"
"Our Sages say, 'One kingdom does not overlap another, even by a hair's breadth,'" responded his grandfather. "It is time for you to become a Rebbe. If you want me to live a long life, you must depart from me, and go to your designated place."
"I will obey my grandfather's wishes, and take leave immediately," responded R. Mordechai Dov, shaking with fear and humility, and realizing his fate.
R. Mordechai Dov and his grandfather remained attached to one another throughout life. There was no matter for which Rebbe Yaakov Yisrael did not consult his grandson, who was a scholar and tzaddik, even after R. Mordechai Dov left for Hornosteipel to become Rebbe there.
***
Zechuso yagein Aleinu v'al Kol Yisrael - May the Cherkasser's merits protect us all!
# posted by yitz @ 10:32 PM