Tonight and tomorrow, the 4th of Shvat, is the yahrzeit of Rebbe Moshe Leib of Sassov, a talmid of the Rebbe Reb Shmelke of Nikolsburg. Born in the year 5505 [1745] in Brody, he was the author of several chiddushim on the Talmud [Chiddushei RaMaL], Likkutei RaMaL, and Toras RaMaL HaShalem. He subsequently became a Rebbe in his own right with many followers, and was famous primarily for his love of his fellow Jews and his creative musical talent.

Previous posts:
Intense Love of the Jewish People
A Niggun to Live and Die For

The following story is from my good friend Yrachmiel’s Ascent website.
***
The Stuffed Lion and the Half Suit
Translated by Basha Majerczyk
The city of Brod was renowned for its Torah scholars, the most famous of whom was the sage Rebbe Moshe Leib. Like many of his colleagues at the time, he was wary of the new Chassidic movement that was then making inroads.
The sexton of Rebbe Moshe Leib's synagogue had a daughter who had been suffering for some time from a mysterious digestive disorder. When the sexton heard about the Chassidic rebbe, Rebbe Elimelech of Lizhensk, he decided to go to him to ask for a blessing for his daughter. The Rebbe gave him some food his wife had prepared, and instructed him to feed it to the girl. As soon as she tasted it her pains went away.
The sexton was filled with wonder and appreciation. He was so impressed by what had happened that he decided to share the good news with Rebbe Moshe Leib. He urged him to go to Rebbe Elimelech to see for himself.
At first Rebbe Moshe Leib was adamantly opposed to the plan, considering it a waste of time that could be better utilized studying Torah. "And besides," he countered, "you know I don't really believe in these newfangled wonder workers..."
But the sexton was persistent. "On the contrary," he said. "You, as a rabbi, have an obligation to check him out for yourself. If you determine that Rebbe Elimelech isn't a true tzaddik (righteous person), you can persuade people not to go to him. But if you find that he really is a holy man, you will have succeeded in dispelling a lot of false notions."
In the end Rebbe Moshe Leib consented and traveled to Lizhensk. The whole way there he thought about what he would say to the Chassidic master, and composed various questions to test his scholarship and piety.
Rebbe Moshe Leib arrived in Lizhensk on a Friday afternoon. He was surprised when he saw that Rebbe Elimelech lived in a tiny little house - not the grand mansion that he had imagined. His surprise grew when he realized that Rebbe Elimelech himself was standing on the threshold, waiting for him. The tzaddik extended his hand in greeting.
"Come in, come in," he said to him warmly. "I've heard so much about you. They say that you're one of the most distinguished Torah scholars in all of Brod." Rebbe Moshe Leib felt a surge of pride.
"Therefore," Rebbe Elimelech continued, "I'd like to tell you an interesting story." Rebbe Moshe Leib's face fell, but the tzaddik didn't seem to notice. 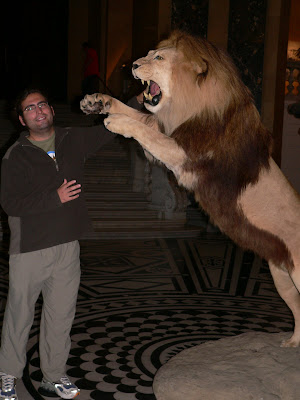 "There was once a brave warrior who did battle with a ferocious lion and succeeded in slaying it. To commemorate his heroic deed, he skinned the animal and filled its hide with straw. He then placed the stuffed lion in front of his house so that everyone would know how strong and courageous he was.
"When the rumor spread that there was a lion guarding his door, all the animals of the forest came to see for themselves. They stood at a distance, too fearful to approach. But there was once clever fox who quickly perceived that the lion wasn't moving. He crept closer, and with one paw swiped at the beast. When he saw that it wasn't alive, he tore the skin apart and the straw fell out. All the animals laughed and returned to the forest."
Rebbe Moshe Leib looked at the tzaddik, not comprehending his meaning. Why had he made the long trip from Brod to Lizhensk? To hear animal stories? He couldn't believe that Rebbe Elimelech had nothing more important to do on a Friday afternoon than tell tales. He was about to say good-bye and return to his inn when the tzaddik continued. "No, don't leave just yet. I have another story to tell you. 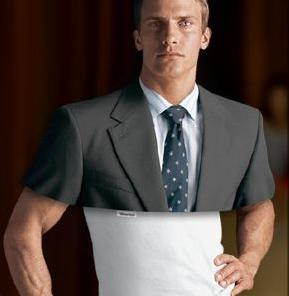 "There was once a very poor man who had never in his life owned a new set of clothes. One day his luck changed, and he came into a large inheritance. The first thing he did was to summon a tailor and commission a fine new garment as befits a nobleman. The tailor measured the man from head to toe, and a few days later returned for the first fitting.
"The man put on the half-completed suit as the tailor rearranged the pins and basting stitches and made little markings with chalk. Ignorant of the way a custom garment is made, the man assumed the tailor was mocking him and threw him out of the house, despite his protestations."
That was the end of the story. Rebbe Moshe Leib, completely confused, went back to the inn to prepare for Shabbat.
Then it hit him: Perhaps the tzaddik was talking about him with his strange tales? Maybe he was trying to tell him that he was only a "stuffed lion"? And like the poor man with the new set of clothes, could it be that he was only posturing as a nobleman? His whole life would have to be reconsidered...
That evening in the synagogue Rebbe Moshe Leib studied the tzaddik in an entirely different way. He became an ardent disciple of Rebbe Elimelech of Lizhensk, and later a Chassidic master himself in the city of Sassov.
***
Zechuso yagein Aleinu - May Rebbe Moshe Leib's merits protect us!
# posted by yitz @ 11:00 PM 1 comments

A great rendition, from an authentic disciple of Reb Shlomo Carlebach. Those who want to lead a Carlebach could learn a lot from this video! Thank you Reb Hershy!

It was Simchas Torah, Rosh Hashana, Yom Kippur, and a wedding all in one! This past Wednesday night, in the Modzitzer Rebbe Shlita's Shtibel in Bnei Brak, a Hachnassas Sefer Torah was held, as a new Sefer Torah was inaugurated in a very festive manner. The Torah was written in the loving memory of the previous Rebbe, the "Nachalas Dan," as he is known by his Chassidim. Rebbe Yisrael Dan of Modzitz was niftar on 20 Sivan 5766. This Sefer was paid for by the Chassidim themselves, so it was a very special occasion. Below is a brief video of some of the dancing, to one of the two new niggunim that the Rebbe Shlita composed for the occasion.

Normally, I would save this for Shabbos Mevorchin, the Shabbos before Rosh Chodesh when we bless the upcoming month, but since this was just posted, I've decided to share it with you now.

It's a video of Yehoshua Kessin, performing Reb Shlomo Carlebach zt"l's version of the awesome Kah Ribon niggun, composed by Rebbe Shaul Yedidya Elazar Taub ztvk"l, the second Modzitzer Rebbe. Reb Shlomo adapted part of this niggun to the "Yehi Ratzon" opening paragraph of the Rosh Chodesh bentching. This is followed by Reb Shlomo's own "Ani Ma'amin" tune, sung to "Mi She'asa Nissim, the second part." Enjoy, and thanks, Shua!