Get Me to Kuzmir for Purim!

Tonight and Wednesday, 17 Shvat, is the 153rd yahrzeit of Rebbe Yechezkel of Kuzmir, one of the leading talmidim of the Chozeh of Lublin, and the Avi HaShosheles [founder] of the Modzitz Chassidic dynasty. The first Modzitzer Rebbe, the Divrei Yisrael, was his grandson.You can find out more about him here, in our previous posts:
Why Are You Staring At Me?
Rebbe Yechezkel of Kuzmir, founder of the Modzitz Dynasty
and also at this post, about the Rebbe Reb Elimelech:
I Remember Him from the Rebbe

The Torah requires all adult men [over 13] to journey on the Three Festivals [Shalosh Regalim - Pesach, Shavuos and Sukkos] to the Beis HaMikdash [Holy Temple] in Yerushalayim, as it says, "Three times a year shall all your males come to see the face of Hashem, in the place which He shall choose [the Temple]" [Devarim, 16:16]. Our Sages admonish us that "one's reverence for his Rebbe should be as one's reverence for Heaven" [Pirkei Avos, 4:12]. According to the Maharal, this is the reason for another instruction from our Sages: "One is obligated to visit his Rebbe on the Regel [the Three Festivals mentioned above]." However, the Gemara [Rosh Hashana, 16b] cites another verse: "Why are you going to him today? It is neither Shabbos nor Rosh Chodesh" [Melachim II, 4:23]. "From this," continues the Gemara, "we learn that on Shabbos and Rosh Chodesh one needs to go." According to the text of Rabbeinu Chananel, the Gemara then asks, "Are we speaking about the Regel?" It answers, "If his Rebbe lives nearby, he must go to greet him every Shabbos and Rosh Chodesh. If he lives far away, then he must come [at least] on the Regel."

The gedolei haChassidus [great Chassidic Rebbes] revealed even more about the benefits of journeying to one's Rebbe on a Shabbos or holiday. "…one goes to Tzaddikim for Shabbos, for in their preparation for Shabbos, they bring Hashem's Name into the Shabbos foods. By eating at their Tish [table] with pure intentions, one can ingest the sanctity of Shabbos and the Divine Name, and be blessed and rewarded with all kinds of benefits" [Rebbe Yechezkel of Kuzmir, Parshas Naso].

The Divrei Yisrael taught us [Parshas Vayigash] that "in truth, for this itself - to come to Teshuva, emuna and bitachon [repentance, faith and trust in Hashem] one needs to come to the Tzaddik." And about Rebbe Yechezkel himself, Chassidim would say that on Shavuos in Kuzmir, one could experience the same spiritual arousal as the Jews had on Mount Sinai when they received the Torah. In short, the benefits of visiting one’s Rebbe on Shabbos or Yom Tov were enormous!

Now the town of Kuzmir, where Rebbe Yechezkel lived, is located on the banks of the Vistula River, on the opposite side from Warsaw. Anyone traveling from Warsaw to Kuzmir to visit the Rebbe had to cross the river. All year long, Chassidim would travel from Warsaw to the village of Yanovtzeh, located directly opposite Kuzmir. One could even see Kuzmir from the Yanovtzeh side of the river. They would then take a small boat across the river to Kuzmir.

However, in the winter, the river would freeze over, and it was impossible to go by boat. Then, people would cross the frozen river by foot, which was still the shortest way to get to Kuzmir. There was a Kuzmirer Chassid who lived in Yanovtzeh, whom all the Chassidim would visit on their way to the Rebbe. They would often have a meal in his home, before making their way by boat [or by foot, in the winter] to their destination.

One year, two Kuzmirer Chassidim had a tremendous urge to spend Purim with Reb Chatzkel. They arrived in Yanovtzeh on Ta'anis Esther [the day before Purim], and came to the home of the Chassid who lived there, to rest from their journey before going on to Kuzmir for Purim.

"You've come today," said the Chassid to them upon their arrival. "It's too bad that you won't be able to spend Purim with the Rebbe. The frozen river is beginning to melt, and the ice isn't solid enough to walk on. And it's too icy to cross the river by boat as well."

The two Chassidim were heartbroken to learn that they couldn't spend Purim with their Rebbe, after such a long and arduous journey to get to Yanovtzeh. Meanwhile, the time for the Mincha [afternoon] prayer had arrived, and the local Chassid went to shul to daven and afterwards [at nightfall] to hear the Megilla, taking his two guests with him - for he feared they may endanger themselves by trying to cross the river. 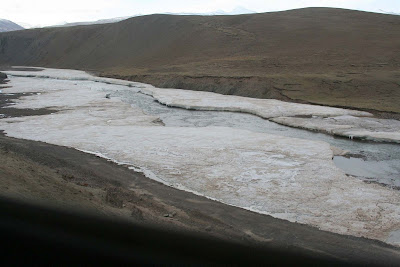 After davening Mincha, the two Chassidim went down to the river to see for themselves. It was absolutely quiet, and not a soul was found venturing forth on the river. Suddenly, a few goyim [non-Jews] appeared and asked them in Polish, "Why are you standing here and staring out over the river?"

"We want to cross the river, but it's impossible!" they replied.

"You foolish Jews! Come with us, we're also going across."

The Chassidim, tempted by their words, followed the goyim as they attempted to cross the river, walking on the ice. When they got towards the middle of the river, the Chassidim noticed that all the goyim who were walking in front of them had fallen into the icy waters! Realizing their dangerous predicament, they thought to turn around and head back towards Yanovtzeh. But they couldn't, for patches of ice were bobbing up and down in the water, preventing them from moving. They began to recite "Shema Yisrael," and tried to remember some divrei Torah from their Rebbe - but because of the impending danger to their lives, they couldn't remember a thing.

Suddenly a man appeared alongside of them, carrying a jug with which to draw water from the river. "Why are you standing here?" he asked them in Polish.

"We don't know how to go, and it's very dangerous!" they replied.

"Come with me, and I'll show you how to get out of here," he told them. In moments, they found themselves across the river, in Kuzmir. They hurried off to the Rebbe's house, with great joy.

Meanwhile, in Rebbe Yechezkel's Beis Medrash, the whole time these Chassidim were in danger, the Megilla was open on the table, the Ba'al Koreh [reader] was ready to begin, but Reb Chatzkel did not allow him to say the opening brachos [blessings]. No one knew why, or for whom, they were waiting. As soon as the two Chassidim came into the Beis Medrash, the Rebbe signaled the Ba'al Koreh to begin the Megilla, without even greeting his newly-arrived guests.

After the Megilla reading, the Rebbe summoned the two Chassidim and greeted them. "Are you really Chassidim?" he asked. "Have you forgotten that our Sages say, not to rely on a miracle? I went through so much trouble, until I was forced to send Eliyahu HaNavi after you to rescue you!"

Only then did everyone understand why the Rebbe had delayed the reading of the Megilla, and how he saw from afar with Ruach HaKodesh.
***