The Modzitzer Rebbe Shlita is currently visiting America. In his visit to Lakewood, he came to the Yeshiva Toras Emes, where he made a "Tish" for the young cheder students. What a joy to see young boys singing somewhat complex Modzitzer niggunim, together with their rebbes [teachers]! In the 8-1/2 minute video which follows, you can see the boys singing a Modzitz tune as they greet the Rebbe, the Rebbe saying an age-appropriate Dvar Torah in Yiddish, followed by the Modzitz choirleader's rendition of one of the Rebbe's niggunim, Libi U'besari. Then there are some more niggunim, including a finale as the Rebbe distributes cake to the boys. Enjoy!
Oh, and thanks to the Lakewood Scoop for this wonderful video!

Traveling with the Rosh Yeshiva

Today was 2 Kislev and the 47th yahrzeit of the Rosh Yeshiva, Rabbi Aharon Kotler ztvk"l. Read more about him at our earlier post, here. In honor of his yahrzeit, we present the following two "travelling" stories [from Revach], plus a Dvar Torah from him on the Parsha.

Rav Aharon Kotler Pays... With Bitachon
On his way back to Lakewood from a talmid's wedding in New York City, Rav Aharon Kotler arrived at the train station and realized he did not have any money to purchase a ticket. Without any viable alternative at that hour, he decided to stand on line at the ticket-purchasing counter, relying solely on Hashem for help.The line grew shorter and shorter, as his turn was quickly approaching without any help in sight. Rav Aharon was not concerned, and just continued to learn, while waiting patiently without any worries.
The person in front of him purchased his ticket and now it was his turn. He still didn't despair and calmly started walking towards the counter as if he had no problem, completely confident in Hashem's salvation.As he approached the counter, a talmid came rushing towards him. He was so happy to see him, he began screaming "Rebbi Rebbi!" Rav Aharon asked his talmid if he could loan him the amount he needed for the ticket, which he did. He took the money paid for the ticket and went home all without batting an eye.

ON THE PARSHA
from HaMaayan, Torah.org
"And Esav came from the field, and he was exhausted." (25:29) "Esav spurned the birthright." (25:34)
Rashi says that he was tired because he had just committed a murder. The Midrash states further that Esav had committed other serious sins on that day, including adultery and idolatry.
If Esav committed such serious sins all in one day, asks Rav Aharon Kotler zt"l (the Lakewood Rosh Yeshiva), why does the Torah single out only the fact that he spurned the birthright? He explains:
The birthright did not give its bearer only material rights, but also (and primarily) spiritual responsibilities. What Kohanim and Levi'im were, later in history -- "For the lips of the Kohen should safeguard knowledge, and people should seek Torah from his mouth" (Malachi 2:7) -- the firstborn were in Yaakov's and Esav's time. It was these responsibilities that Esav rejected when he spurned the birthright, and he thus demonstrated his attitude towards spiritual matters.
By telling us that Esav spurned the birthright, says Rav Kotler, the Torah is informing us of the root cause of all of his other sins. The details of Esav's sins do not matter; what is important is that Esav had an improper attitude. (Mishnas Rav Aharon Vol. III, p. 191).
# posted by yitz @ 8:38 PM 0 comments

"Every song, every letter, every note, is a living monument to the great soul"

Today is 16 Ram-Cheshvan, and the 15th Yahrzeit of Reb Shlomo Carlebach zt"l. In honor of this great event, I would like to share with you the eulogy given at Reb Shlomo's funeral by the then-Chief Rabbi of Israel, Rav Yisrael Meir Lau Shilita.
I received it from the Rabbi Shlomo Carlebach Foundation, who noted that the eulogy was translated from Hebrew to English by Rachel Ebner, transcribed for digital use by Reuven Goldfarb, and edited for publication by Rabbi-Chaver David Wolfe-Blank (zt"l). I have done some light editing on it for this blog. 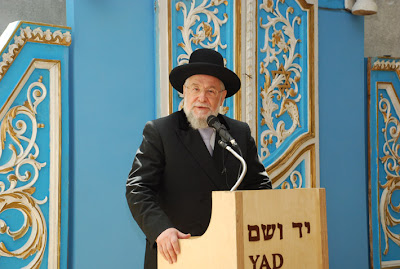