After a long hiatus, I could not resist sharing the following story, which was posted on the Cross-Currents site. I have done some light editing, added some links and a picture. 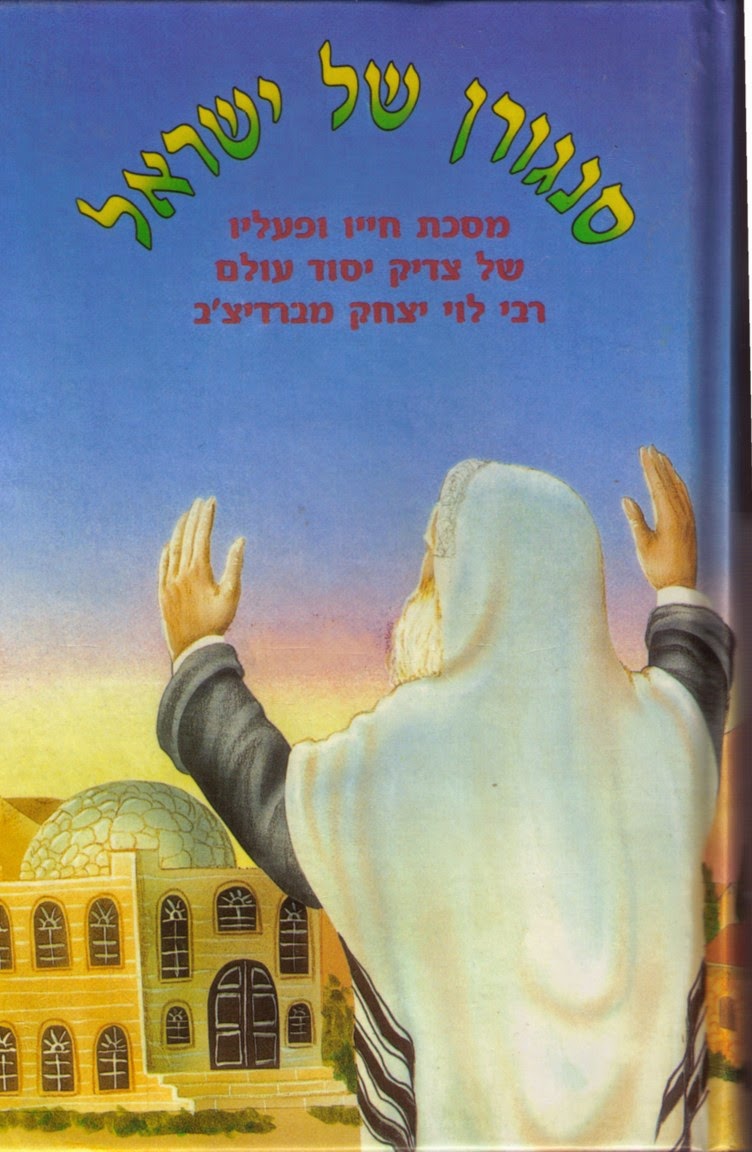 The Berditchever in Gaza
by Yitzchok Adlerstein, on July 28th, 2014

I cannot reveal my source. All I can say is that it happened as he patrolled late at night in a Beit Hanoun street abandoned by its residents, walking a few paces ahead of the rest of his unit. He saw a figure, standing to the side, shrouded in light. “Shalom alecha, my son,” he said. His voice was redolent with peace and tranquility. My friend instantly realized that this figure was not of this world, and responded, “Shalom alecha, rabi u-mori. I presume that you are Eliyahu ha-Navi?” The figure smiled. “Not quite. They used to call me Levi Yitzchak, and I have been watching the events here with keen interest. I had to come back to revise one of my more famous songs – A Din Toyre Mit G-tt.” He handed my friend a handwritten scrap of paper, and vanished into the night.

But Your people, Yisrael, what do they say?
Ani Ma’amin. Yisrael b’tach baShem.
These are the songs their sons sing as they march to and from battle with those who scoff at You.
And how I wish they only scoffed! But they rain down their rockets upon your holy Land and its inhabitants, who look to You for protection,
While the enemy sends their sons to burrow through the ground in the hope of slaughtering the innocent.
And those nations look on, and heap scorn and hatred upon us for simply surviving.
After two thousand years of exile, they have learned to tolerate us.
But only if we are dead.

If Yisrael and its Torah and You are all One, Whom do they really malign?
Is it not You they ridicule, not just us?
A few weeks ago, I thought I understood what You wanted.
You have always chastised us, because You care about us, and discipline us for our good.
But You have always warned us first.

You told us that if we would follow You inconsistently – b’keri – You would do the same.
We have been guilty of that.
But surely You have taken note of how this holy nation has lived in the last weeks, steadfastly turning to You – even those who ordinarily don’t bother?
Was it not a special moment when a government official who had not entered a shul since his son’s bar-mitzva searched his house for his grandfather’s Siddur so that he, too, could turn to You with the rest of the country?

Did You not take pleasure in the Shema Yisrael spelled out by the lights of a tower in Tel Aviv, the “secular” city?
How often before did You witness tens of thousands of people gather to beseech you, observant and non-observant together, as they did there when we still thought that the three kedoshim were alive?
(And speaking of the three kedoshim – did You not have to shed a Divine tear over the story of the bar-mitzva boy, Gilad Shaar, who sought out Rav Yitzchak David Grossman to find out how to merit sanctifying Your Name?)

You warned us again in the Gemara that the galus would be prolonged because of sinas chinam.
Have You ever witnessed as much ahavas chinam as in the last week? Thirty-thousand people attending the levaya of someone they did not know?

Lines down the halls of hospitals, strangers waiting patiently to offer words of encouragement to wounded soldiers they never met?
Hordes of people descending on the border (despite the rockets) to offer gifts to the soldiers of Tzahal fighting for Your honor?

You warned us not to fall into the kochi v’otzem yadi trap.
You got us on that one! Close to five decades ago, You granted us a spectacular victory. Some realized it was from You; too many others credited the might of their planes and their prowess.
Years and years went by, and with few exceptions, the Rosh Memshala did not speak about You.

But this week, praising the accomplishments of our soldiers, the political leader of the country ended his speech with these words: “With the Almighty’s help, and theirs, we will succeed.”
He put You first, where You belong.

You must have noticed how different the mood is this time. With all the success of the technology You have given us the intelligence to design, more people credited the Big Kippa than the Iron Dome for our incredible salvation.
(Even the evil ones had to declare in inch-high headlines, “Their G-d Changes the Path of Our Rockets in Mid-Air, Says Terrorist.”)

If this is not full, national teshuva, does it not count at least as a full national chudo shel machat?
Should that not suffice?

What more do you want of Your people Yisrael?
We will gladly do it – so long as You will allow us to come closer to You, and You will continue to show Your love for us.
The others continue to blaspheme You.

But I, Levi Yitzchak son of Sarah Sosha of Berditchev, say:
“Yisgadal v’yiskadash sh’mei raba/Glorified and sanctified be Your great name.”

And I, Levi Yitzchak, son of Sarah Sosha of Berditchev, say:
From my stand I will not waver.
And from my place I shall not move
until there be an end to this exile.

If you want to Fastest Car In The World. you can visit listforever.com here you will get Top 30 Fastest Cars In The World | Pictures, Price and Specifications

if you want to know Fastest Bikes in the World. you can visit listforever.com. Here you will get Top 12 Fastest Bikes In The World | Pictures, Price and Specifications

Thank you for sharing excellent information. Your website is so cool. I am impressed by the details that you have on this website. It reveals how nicely you understand this subject. Bookmarked this website page, will come back for extra articles. You, my friend, ROCK! I found simply the info I already searched everywhere and simply could not come across. What a great web site. Visit@: my sites :- office.com/setup »Norton.com/setup»McAfee.com/Activate

Thank you for sharing excellent information. Your website is so cool. I am impressed by the details that you have on this website. It reveals how nicely you understand this subject. Bookmarked this website page, will come back for extra articles. You, my friend, ROCK! I found simply the info I already searched everywhere and simply could not come across. What a great web site. Visit@: my sites :- office.com/setup » Norton.com/setup » McAfee.com/Activate

" office.com/setup - Now you don't have to worry about Office Product key setup, It is easy and quick to setup. Get started with Office and Install Office. "

" Enter Key Norton Setup, after purchasing Norton from visit www.norton.com/setup, sign in to your Norton account then enter product key for Norton install. "

" mcafee.com/activate - Turn on real-time protection by going through the steps given for downloading, installing and activating McAfee product. "

Very Unique article thanks for sharing with us. this is very knowledgeable for me.

Hello Sir/mam This is a very helpful Blog articale thanks for sharing with us I like this Article.Thnak You so much.
Mcafee.com/mis/retailcard | mcafee.com/activate

Similarly, Microsoft Inc. developed a complementary protection program Called Windows Defender.It does not provide full protection towards malware, Trojans and other malicious websites. It can probably cause damage to the computer.Windows defender only offers real-time protection and other security threats but is not effective to provide full security to the user.
Norton.com/setup

I appreciate your hard work. Keep posting new updates with us. This is really a wonderful post. Nice Blog Very interesting and useful information on your blog. Thanks for sharing the blog and this great information which is definitely going to help us. Know about Garmin.com/Express.

Thanks for the share great info, Very useful done great job posted very useful info. A good blog to read! writing skills are awesome. Thanks and good luck keep posting. Are you wondering about Garmin.com/Express? Here are few steps to follow. You can talk to our experienced Garmin professionals to seek step by step guidance.

Thanks for providing valuable information. If you are looking Manchester Escorts job, quickly apply at Boss Agency.