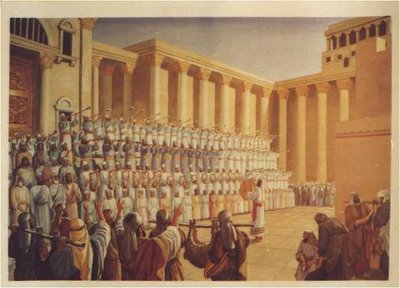 On the way to the Korban Pesach [sacrifice of the Paschal lamb]:
The priests allowed us to enter into the Courtyard, one group at a time. When one group was finished, another would enter. All the while, the Levites stood on their platform and sounded blasts from their shofars (rams' horns) and silver trumpets.
The Levitical choir also included singers and musicians who played on trumpets, harps, lyres, and cymbals. They sang the festive Hallel songs of thanksgiving. Everyone who had entered with their Passover offering, also joined in and sang along. When we finished the Hallel, we would start all over again!


Again, for me, we lead off with Modzitz. Modzitz has its own Pesach Niggunim page
Featured are: V'hi She'amda and Chad Gadya for the Seder; B'tzeis Yisrael, Odcha and Ana Hashem from Hallel; the classic Tefillas Tal, composed by the Imrei Shaul in 1936; V'koreiv P'zureinu from Musaf; and Baruch Elokeinu. There is another B’tzeis Yisrael on the main music page as well as the following: Hodu LaShem from Hallel; Kah Keili, a Yom Tov prayer recited before Musaf, and Bnei Veischa from Musaf. Of course, the Kaddishes from the main music page can also be used in the Yom Tov davening. I should mention, again, that the Modzitzer Rebbes all were and are prolific composers, and this is but a mere fraction of their output for Pesach. It was very common for the Rebbes to compose new niggunim every Pesach. Thus, there are many niggunim for B’tzeis Yisrael, which were composed almost every year; other favorites were V’Hi She’amda from the Seder, and Hodu LaShem from Hallel. R. Ben Zion Shenker, as well, has composed niggunim for these sections. Modzitz also has its own Haggada, Ashei Yisrael.

Reb Shlomo Carlebach has several Pesach niggunim. From the Haggada, Shomrim Hafkeid, v’Nomar L’fanav, and Adir Hu. Of course for Hallel, there’s a Carlebach niggun for just about every section. And from the tefillos, Bnei Veis’cha, v’Hashev Kohanim, and Melech Rachaman, all from Musaf.
A beautiful niggun for Bnei Veis’cha [a different one] is on this recording, “Nevertheless” by Aaron Razel & the Witt Children, the last track. One can find a lot of Reb Shlomo's teachings about Pesach on this page, and his Haggada here.

And there are some nice videos of one of the Bobover Rebbes [there are now two Rebbes]:
Ne’ilas HaChag [festival closing] at the night following Pesach
Escorting the Rebbe home to his porch, from the same night.

Here you can find, yes, a Digital Haggada! To assist people with limited Hebrew skill and any unfamiliarity with classic Passover melodies, Judaism.com is offering the Digital Haggada: free downloads of MP3 files of essential excerpts from the Passover Haggada. These tracks were recorded by Chaim Davidson, a Pittsburgh Baal Tefilla (leader of synagogue services). Interestingly enough, the B’Tzeis Yisrael presented consists of two Modzitz niggunim, the first being Ben Zion Shenker’s tune; and the second, a niggun originally made for Kaddish by the Imrei Aish [previous Rebbe], often sung to Shir HaMaalos and Keil Adon. You can also download the entire Digital Haggada as a zip file.

The Jewish National and University Library – National Sound Archives’ presentation for Pesach consists of twelve different renditions of the famous song from the latter part of the Pesach Haggada, Echad mi Yodea [Who Knows One?]. These digital fragments, in MP3 format, illustrate the range of Jewish communities represented in the Archive’s more than 7,000 hours of recorded music: Chassidim - Chabad; Israel; Netherlands; Greece - Corfu; Italy; Persia; Greece – Salonika; Morocco – Meknes; Turkey; Hungary; Morocco – Tetuan; and Yemen.
The Chabad rendition is in Russian [Ech ty zemliak, zatshem zhe ty durak], arranger by Andre Hajdu and sung by Berel Zaltzman. It was recorded at a performance in Jerusalem in 1976.

I’m sure I’ve only hit the “tip of the iceberg” here. Readers are asked to send in their favorites in the comments...

Comments:
I sounds great, but what I'd like to have on disk or internet would be The Rabbis' Sons' tunes to Hallel and the rest of what they composed in the mid-late 1960's.

My memories of the exact tunes get fuzzier by the year, and for sure decade. They were very "singable," and it's a shame that they have somehow been lost to us.

Batya, This IS a personal blog & I do have my preferences.
Nevertheless, if you check the "Digital Haggada" links you may find some of what you're looking for...b'Hatzlacha!

The first B'Tzeis Yisroel is from the Imrei Shaul, not R'Ben Zion Shenker