From last year's post, The Maharyatz on Negina, updated:
Tonight and tomorrow is Yud [10th of] Shvat, and the 57th yahrzeit of Rebbe Yosef Yitzchak Schneersohn (1880-1950), the sixth Rebbe of Chabad-Lubavitch, who was one of the most remarkable Jewish personalities of the twentieth century. In his seventy years, he encountered every conceivable challenge to Jewish life: the persecutions and pogroms of Czarist Russia, Communism's war on Judaism, and melting-pot America's apathy and scorn toward the Torah and its precepts. The Rebbe was unique in that he not only experienced these chapters in Jewish history -- as did many of his generation -- but that, as a leader of his people, he actually faced them down, often single-handedly, and prevailed.

Both Chabad-Lubavitch and Rabbi Shlomo Carlebach are well-known for their pioneering efforts in Jewish outreach, "kiruv rechokim." But what may not be so well-known is that Reb Shlomo was actually the first Chabad shliach [emissary], way back in 1949. With this in mind, I bring you the two stories below, which are strikingly similar. It is highly probable that Reb Shlomo heard the first story from the Maharyatz himself. [I did some light editing on all that follows].

During the winter of 5663 (1903), when I accompanied my father for the couple of months he spent consulting medical specialists in Vienna, he would sometimes go out in the evening to visit the shtiblach of the local Polish Jews – to be among Chassidim, to hear a story from their mouths, to listen to a Chassidic vort, and to observe fine conduct and refined character.

One Wednesday night, on the eve of the Fifteenth of Shvat, my father visited one of these shtiblach, where several hoary Chassidim were sitting around together and talking. As my father and I drew nearer, we heard that they were telling stories of the saintly R. Meir of Premishlan.
Among other things, they related that the mikveh in R. Meir's neighborhood had stood at the foot of a steep mountain. When the slippery weather came, everyone had to walk all the way around for fear of slipping on the mountain path and breaking their bones - everyone, that is, apart from R. Meir, who walked down that path whatever the weather, and never slipped.
One icy day, R. Meir set out as usual to take the direct route to the mikveh. Two guests were staying in the area, sons of the rich who had come somewhat under the influence of the ''Enlightenment'' - of the Haskala movement. These two young men did not believe in supernatural achievements, and when they saw R. Meir striding downhill with sure steps as if he were on a solidly paved highway, they wanted to demonstrate that they, too, could negotiate the hazardous path. As soon as R. Meir entered the mikveh building, therefore, they took to the road. After only a few steps they stumbled and slipped, and needed medical treatment for their injuries.
Now one of them was the son of one of R. Meir's close Chassidim, and when he was fully healed, he mustered the courage to approach the tzaddik with his question: Why was it that no man could cope with that treacherous path, yet the Rebbe never stumbled?
Replied R. Meir: ''If a man is bound up on high, he doesn't fall down below. Meir'l is bound up on high, and that is why he can go up and down, even on a slippery hill." 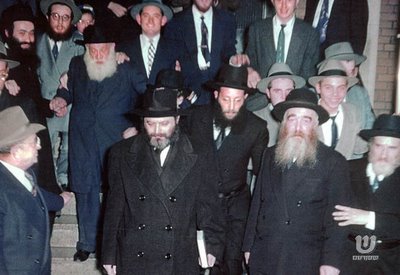 From the Reb Shlomo Carlebach website:
The old Lubavitcher Rebbe [the Maharyatz] asked Reb Shlomo and Reb Eli Chaim to strictly observe three matters: recite the bentsching [blessing after meals] only from a Siddur, sleep while wearing tzitzis, and keep a bowl for hand-washing under the bed at night. With this he blessed them to be not good Germans, but "Chassidishe Yidden".
After the brothers became Bar Mitzva, they resolved never to touch their beards. Their mother told them that they looked less like proper Rabbis and more like goats. After they arrived in America, the boys went to see the Rebbe Rayatz. Seeing them, the Rebbe said, "I see the results of our work in the external appearance. Now we begin to work on the inside." Years later, the Rayatz observed in a letter to Reb Naftali [Reb Shlomo’s father], "We have taken in the neshamos (souls) of OUR sons." The old Lubavitcher Rebbe accomplished his dream of turning Reb Shlomo and his brother into Chassidishe Yidden.
On Rosh Hashana, the Rebbe Rayatz observed "taanis dibbur" (not to speak, except for matters of holiness). Nevertheless, Reb Shlomo noticed that the Rebbe's lips never stopped moving, the whole day, even at the table. When he asked, Reb Shlomo was told that the entire day of Rosh Hashana the Rayatz would repeat Sefer Tehillim in its entirety, by heart.
The only photograph seen in the apartment above the Shul in New York was the Rebbe Rayatz's likeness, which was prominently displayed both behind Reb Shlomo's chair at the Tish as well as in Reb Shlomo's humble room.

In 1949 Shlomo Carlebach's destiny was irrevocably altered when he received a summons (together with his friend Zalman), from the Friehardiger (literally early, meaning previous) Lubavitcher Rebbe. "It was Yud-Tes Kislev (the 19th of Kislev), in December," Zalman recalls, ''and Shlomo and I were inside 770 (Lubavitch headquarters), standing in the corridor near the Rebbe's study. Suddenly, the door opened and Berel Hashin, one of the Rebbe's assistants, waved us into the inner sanctum. 'The Rebbe wants to talk to you both,' he whispered. The Rebbe looked at us and said incisively without preamble, 'Kedei eir zolt onheibein foran tzu colleges (it's time for the two of you to start visiting college campuses).' At this point in his life, Shlomo had never done college outreach before, although he had organized a learning group geared towards people of limited Jewish backgrounds called TASGIG (Taste and See that G-d is Good). I had done a little outreach work previously at Brown University, and also was teaching United Synagogue Youth people, but we were both wet behind the ears. The Rebbe suggested Brandeis University for our first foray, and we collected thirteen pairs of tefillin to distribute at a Chanuka party scheduled to be held in the campus cafeteria.
"I'll never forget that day,'' Zalman chuckles. ''We walked up an icy stairway to the campus cafeteria where a 'Chanuka Dance' was in progress. When Shlomo and I walked in, laden with packages, the music came to a halt and everyone just stared at us, two Lubavitcher Chassidim with yarmulkes, beards, and tzitzis. We divided up the cafeteria like two generals: 'You take the right side, I'll take the left!' and we started doing our thing. Shlomo began telling Chassidic stories, and I started speaking about Jewish mysticism. Soon we were totally surrounded by enraptured listeners, and we didn't leave until two o'clock in the morning.
As we prepared to depart the way we had come in - an icy stairway that had been transformed into a slippery slope - someone yelled after us, 'Hey, there's an easier way out that isn't icy; you'll slip and fall and break your necks if you go down those steps.' For some reason, we disregarded the warning, and descended the steps easily, without incident. Watching our easy descent, a couple of kids tried to follow us, only to slip, slide, and topple down the icy stairs.
'Hey, how'd you manage to navigate the stairs without falling?' one student asked us in astonishment, after he watched his friends' precarious plummet, With a wink and a grin, Shlomo answered, 'Az men halt zich oohn oiven, falt men nisht hinten: If you hold on to Above, you don't fall from below.' "

Comments:
The one on the right is Reb Hendel Lieberman, older brother of Reb Mendel Futerfas. the Rebbe is on the left, but this pic was taken after the Rayatz passed away!

I was about to say the same thing as tzig , Baruch Sh'kevanti