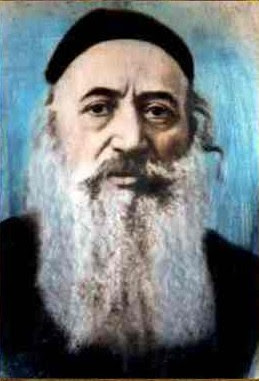 There are niggunim that are so powerful, so real and authentic, that they loom larger than life and larger than their composers. It’s as if they came into being together with the world. One such niggun is the one I’m about to describe.

Later this week, on the 13th of Kislev [Thursday night-Friday], is the yahrzeit of Rebbe Yisrael, the first Modzitzer Rebbe, known as the Divrei Yisrael. Rebbe Yisrael developed the Modzitzer tradition of Avodas Hashem [Divine service] through Negina. His niggunim traveled way beyond the environs of Modzitz, and were and are sung far and wide.

Most amazingly, perhaps his best-known niggun [or certainly one of them] is one that many don’t realize that he composed. Composed in 5660 [1899], it was set to “Amar Hashem L’Yaakov” on the second Modzitzer Melave Malka recording, which came out in the 1960s. Rebbe Shaul Yedidya Elazar [the second Rebbe]’s son told me that his father used to sing it to Yedid Nefesh. Every Modzitzer Rebbe’s descendant and Chassid walks down to the Chupa to this niggun. In Yeshivas Sh’or Yoshuv, which I attended, every Chasan walks to the Badecken [when the Kalla’s veil is drawn over her face by her Chasan, just before the Chupa] to this niggun.

In addition, it is used by Chazanim and baalei tefilla extensively to enhance various parts of the Shabbos or Yom Tov services. For example, the Virtual Cantor uses it for his rendition of Tefillas Tal:
Elokeinu and Tzaveh.

So while many people know this niggun, there seems to be a bit of confusion as to its composer, as mentioned. For instance, Daniel Ahaviel, a virtuoso violinist, plays this tune on his VeAhavta recording, but calls it “Melody from the [or, ‘Niggun Ha-] Baal Shem Tov” [click on “CD Back View”]. You can hear this recording here. Apparently taking his cue from Daniel, Reb Moshe of Tzfat also refers to it as the Baal Shem’s niggun, on his music/video page [click on “audio”, then scroll to and click on the Baal Shem niggun, you can play and/or download it from there].

Finally, there appears to be a claim by Vorker Chassidim [today’s descendants are Amshinov Chassidim] that this is a Vorker niggun. This apparently arose because there were definitely visits by Vorker Chassidim to the Divrei Yisrael in Modzitz, where they presumably learned the niggun and brought it back to Vorke. Over time, its origins were forgotten and they assumed one of their Rebbes [or Chassidim] had composed it. [We have also have anecdotes about encounters between the first Vorker Rebbe and Rebbe Yechezkel of Kuzmir, the Divrei Yisrael’s grandfather].

In fact, in a recent release of a recording called “L’Chaim Tish III,” this tune is sung [Track 6] to “Asader L’Seudasa” [one of the Arizal’s Aramaic poems; this one is recited or sung at the Shabbos daytime meal]. And the credit for the composition is listed simply as “Vorke.” I was somewhat surprised at this, especially since they sing two other Modzitz niggunim on this CD, “Yibaneh HaMikdash,” composed by Reb Shaul, the second Rebbe; and “Kadsheinu” composed by the Imrei Aish, the third Rebbe. Moreover, this mistake was a main impetus for this post, to set the record straight.
# posted by yitz @ 6:05 PM

Comments:
to add more confusion...
I learned this niggun as "Adam Harishon's Niggun".
Have you ever heard of it being referred to that way?

thanks for setting it straight!

Yes, maks, I've heard that too - it's probably referred to as that because it's used for so many Chupas. But I haven't seen it that way on a recording, so I didn't refer to it.

what other songs were used in shor yoshuv? how interesting that a traditional yeshiva has special songs, like a chassidut!

You should put all this into some sort of book.

I walked to the Bedekin with this niggun too but I had no idea it was a thing!