Today is the 2nd of Shvat, the 208th yahrzeit of the Rebbe Reb Zusia of Anipoli, talmid of the Maggid of Mezritch and the younger brother of the Rebbe Reb Elimelech of Lizhensk, who introduced him to Chassidus. He was a great anav [humble person] and had fervent yiras Shamayim – fear of Heaven. His divrei Torah appear in a small sefer called Menoras Zahav [“The Golden Candelabra”]. Reb Zusia is also the forefather of the Hornsteipel Twerski family, who are direct descendants [ben acher ben] of his.
*
Previous posts:
Stoking the Fires of Divine Service
The Rebbe Reb Zusia and the Niggun of Forgiveness

The Rebbe Reb Zusia and his family lived in abject poverty, but the Rebbe was always 'satisfied with his lot.' His wife was never accustomed to luxuries, and due to the dire straits, she managed to live very frugally, wearing the simplest of clothes - most of them old and used. However, she once desired to have a new dress made, and nudged her Rebbe Zusia until he finally was able to buy her the material. When she received it, she brought it to a tailor to have the dress made.

It was only a few days later that the Rebbe Reb Zusia saw his wife was again in distress. "Now what happened?" he inquired. "Didn’t you just have a new dress made, so why are you so sad?"

"What dress? I have no new dress at all!" was the response.

"How can that be? I myself gave you the materials for the dress," asked the Rebbe. 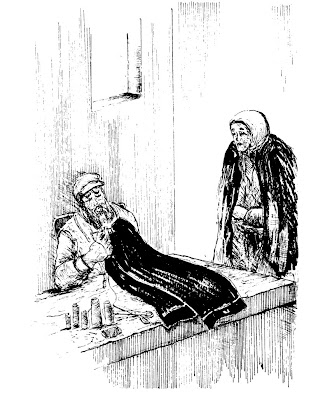 "When the tailor had finished making the new dress," she related, "I went to his shop to bring it home. As he was about to hand it over to me, he let out a deep, heartfelt sigh. I then asked him, 'What is the cause of your distress?' "

"He then explained: 'My daughter just became engaged to a fine boy, but due to our financial distress, I don’t have money for a proper dowry, or even for a wedding dress. As I was making your dress, the chasan [groom] saw it, and thought that surely this is for my daughter, his kallah [bride]. When he learned that it was for someone else, he became very angry, and caused me much pain and distress.' "

"Upon hearing the tailor’s woes, I didn’t hesitate, and gave him the dress as a gift for his daughter’s wedding. But now, I am distressed that I only have these tattered clothes to wear."

"You did a wonderful mitzva by giving your dress to the tailor’s daughter," said the Rebbe Reb Zusia, "and you have nothing to be distressed about. But did you pay the tailor for his work on the garment?"

"What!?" exclaimed his wife. "I gave him the entire garment - why should I have to pay him for the work?"

"Well, let’s see," said the tzaddik. "All week long, this poor tailor worked on your garment, in anticipation that by the week's end, he would be able to have some money to feed his wife and children. Now what should this poor man do? Where will he get the money to feed his hungry family? Is he guilty that you gave his daughter the dress as a gift, that he should be deprived of his wages?"

Listening to her husband, his wife immediately took out a loan in order to pay the tailor his wages. The tailor received a wedding dress for his daughter, as well as his earnings. And the Rebbe Reb Zusia and his wife? They were delighted to have done the mitzva of Tzedaka to perfection!
*
UPDATES: 1. Two more wonderful Rebbe Zusia stories [one of them in the comments] can be found at our friend, A Simple Jew, here.
2. There's also some lovely material on Rebbe Zusia at R. Tal Zwecker's Beer Mayim Chaim blog, here.

Comments:
Oy, so much to learn from those greats.