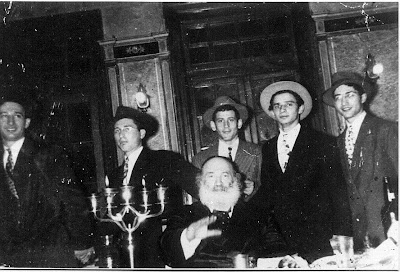 This Shabbos, 16 Kislev, is the 61st yahrzeit of the second Modzitzer Rebbe, Rebbe Shaul Yedidya Elazar Taub, known as the Imrei Shaul. Our previous posts:
Of Smoke and Beans
HaBocher b’Shirei Zimra
The Kah Ribon Niggun
This year, I would like to share a story with you about a very interesting and fateful encounter that the Rebbe had. But first, some background info as a prologue to our story:

Rebbe Shaul fled from Poland to Vilna when World War II broke out but stayed there briefly before deciding to come to America.
After Sukkos of 1939, Rebbe Shaul and his family came to Vilna, the hotbed of Hisnagdus [opposition to Chassidus]. Whenever Rebbe Shaul had a Tish in Vilna, the shul was packed by Chassidim and Misnagdim alike, all of them pushing and shoving to get as close as possible. Rebbe Shaul commented, "Had I been alive in the time of the Gra [Vilna Gaon], there would never have been the big machlokes [dispute] between Chassidim and Misnagdim. I would have sung a niggun and the fighting would have stopped."
At a gathering of people in Vilna, a niggun of Rebbe Shaul's was sung. One of the participants told Rebbe Shaul that this niggun was composed by Rebbe Levi Yitzchak, the Berditchever Rav. Rebbe Shaul commented appreciatively, "It feels good to have one’s niggun called a Berditchever Niggun." As an interesting historical footnote, Rebbe Shaul spoke at the 19th of Kislev, 5700 [1939] farbrengen [gathering] of the Lubavitcher Chassidim in Vilna.
In late 1940 the Rebbe arrived in the Williamsburg section of Brooklyn, where he spent seven years before moving to Palestine. It was in Williamsburg that both R. Ben-Zion Shenker and R. Shlomo Carlebach fell into the Modzitzer orbit. Carlebach had just been bar-mitzvahed and was enrolled in the Mesivta Torah Vodaas yeshiva, when he started attending the mobbed gatherings at the synagogue and at the Rebbe’s Tish or table. "It was gevalt [awesome]," Carlebach recalls. "His neshama [soul] was music. He didn't compose it. It just came out of him day and night."

And now, on to our story…

A Fateful Encounter
In 1940, in what can only be described as "a match made in Modzitzer heaven," a scrawny, very short lad, at the tender age of sixteen, met Rebbe Shaul Yedidya Elazar Taub of Modzitz, the second Modzitzer Rebbe (1886-1947). In those days, R. Ben-Zion Shenker would let his singing voice speak for him.
"At that age, what did I know?" said Shenker. "But I did know enough to tag along with my father when he went to Friday night services at the big Van Buren Shul, then situated in the heart of the Bedford-Stuyvesant section of Brooklyn, where my family lived."
That very night, in attendance was Rebbe Shaul, the son of Rebbe Yisrael, and this was his first Shabbos since he arrived in America to live. Shenker, the singer who would make Modzitzer music even more famous worldwide, heard the great Modzitzer music for the first time, from the very lips of Rebbe Shaul at a Friday night Tish.
The next morning, after the Shabbos Shacharis [morning] service, young Ben-Zion returned home to say Kiddush for his mother, while his father remained with the Rebbe at his host's home for Shabbos lunch. Sometime later that afternoon, Shenker arrived at that home and quietly took a seat in the living room to wait for his father.
But something happened. Ben-Zion Shenker's eye caught the sight of a book on the coffee table: R. Meir Geshuri's LaChassidim Mizmor. Picking it up, Shenker leafed through the book and, having learned to read musical notation from his earliest youth, began to hum a tune from a piece of music he was looking at. Within moments, the Modzitzer Rebbe appeared before the boy.
Whatever feelings young Shenker had or didn't have at that moment, his whole body froze when he beheld, face to face, the towering figure of Rebbe Shaul.
With a fatherly smile, the Modzitzer Rebbe asked young Ben-Zion if he read music. Shenker found his voice quickly enough to say yes.
"Well, don't stop. Sing on. Sing on," the Rebbe encouraged him.
Ben-Zion started to protest that he had never read the notes before, and that he would be at a disadvantage. But, instead, he sang out, enthralling the Rebbe and all the other luncheon guests who by then had joined the Rebbe and his new protege singer in the living room.
As for Ben-Zion's father, we can only imagine him standing there, his heart bursting with pride, sensing that there was a Modzitzer in his son's future.
"The first song I sang from these notes was a 'Shir HaMaalos.' The Rebbe liked the way I sang it, and was enthused with my precision, even though I had not known this tune before at all. He asked me to sing another song, then another, and still another. Finally, he asked me my name. I told him my name was Ben-Zion."
"Then the Rebbe said, 'Don’t sing like a speeding train, but like a clock: tick-tock, tick-tock; slowly.' That was my first lesson from the Rebbe in Negina."
It began that way with Shenker and his Rebbe. "I helped in every way I could to write down Modzitzer music, under Rebbe Shaul's direction." Within a year, in 1941, at another Shalosh Seudos, Shenker heard the Rebbe sing his father's song, "Song of the Homeless" for the very first time.
"I knew I could--no, I cared not to!--sing anything again but Modzitzer music."
In 1962, he recorded the song, "Mizmor L'David," among other Modzitzer favorites, with the help of an orchestra and an eleven-man choir, conducted by Vladimir Heifetz, with music arrangements by Velvel Pasternak. For him, Modzitzer music separated the Shenker boy from the Shenker man. Surely, Meir Shimon Geshuri unconsciously had in mind Ben-Zion Shenker when he wrote about Rebbe Yisrael's songs: "The general pattern of the lengthy works is to start out on a low level and ascend to a final stage of ecstasy and positive expression of hope and confidence." From singer-composer to singer-composer, from Modzitzer Rebbes to disciple Ben-Zion Shenker, Modzitzer music is inextricably tied up with the voice of Ben-Zion Shenker.
# posted by yitz @ 10:47 PM 0 comments 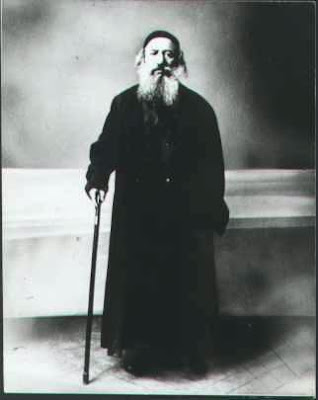 The following brief bio also serves as an intro to our story:

The Modzitz Chassidic dynasty was founded by Rebbe Yisrael Taub zt"l, who was born in 1849, in Ratcoinz, Poland. In 1888, upon the death of his father, Rebbe Shmuel Eliyahu of Zvolin, he assumed the leadership of the Kuzmir-Zvolin Chassidus. In 1891, he settled in Modzitz and resided there until the outbreak of World War I in 1914, at which time he fled to Warsaw. He remained there until his death, on the 13th of Kislev 5681 (Nov. 24, 1920).
He was a prolific composer of niggunim - hundreds of which are remembered to this very day, in Modzitz and across the Jewish landscape. One of his most famous, the Heimlozer Niggun - (Niggun L'Mechusrei Bayis) or the Song of the Homeless - which is perhaps better known as his Mizmor L'David - has become a classic. Through it, the Rebbe expresses musically the feelings of a Jew uprooted from his home due to war, wandering around and living almost exclusively from emuna [on faith].

Modzitz became famous because of its Rebbes, beginning with Rebbe Yisrael Taub, whose niggunim won the hearts of many. He paved a new, unique way in this realm. In his lofty, original compositions, one does not feel an imitation of the people or the environment in which he lived. He created a special world without interference from the outside. His compositions are noted for their clarity, loftiness and strength of soul.

His "Melody of the Homeless" achieved unusual popularity. It was composed in the town of Radom at the time of the First World War, when hunger and distress were the lot of thousands who passed through the city to find refuge and calm from the attacks of the Germans. The niggun is replete with legend. Some called it "The Niggun of War or Peace." It is said that the Rebbe composed it when Kaiser Wilhelm turned to England and France with an offer of peace.

Others called it "Mizmor L'David," since the Rebbe sang it to these words [Tehillim 23] each Shabbos at Shalosh Seudos [the third meal]. In the niggun, Rebbe Yisrael poured out his pain and distress over the lot of the Jews - and there was no one that wasn't in distress. The Rebbe would say that only through niggun could one attain redemption, an idea that all the great leaders of Chassidus, from the Ba'al Shem Tov onwards, espoused and promoted.

As mentioned, the niggun was composed during World War I, when the soldiers of the Russian Czar's army banished the Jews from the fortified cities. The Rebbe, together with the other Jews, had to take up the staff of exile from Modzitz, known as the Ivangrad Fortress. The decree was made hastily, and no form of persuasion could help to deter it. Situated on the Vistula River, the Ivangrad Fortress was considered a key stronghold, and the Jews were seen as potential spies and enemies of the "Homeland".

Rebbe Yisrael accepted the decree and moved to Radom. There he saw the tragedy that befell Polish Jewry - thousands of refugees, homeless, wandering from place to place. This pierced his heart, and gave rise to new niggunim. The niggun "Mizmor L'David", composed in Radom, gave expression to his pained heart, which was filled with hope and trust in Hashem as well. What an expression of faith can be found in the words, "Even though I walk in the valley of the shadow of death, I'll fear no evil, for You are with me." The niggun is an admixture of pain and comfort. The uprooted refugees found the tune to be a balm for their distress, and sung it at every opportunity. It became an anthem of the homeless refugees, on the trembling lips of many - a true "song of the people." It was sung on Shabbos and Yom Tov, by Chassidim and non-Chassidim alike, and became a theme song for Jewish musicians [klezmerim] at weddings and other musical events.

Together with the famous "Ezkera", this tune gave Modzitz a name for outstanding music. At the war's end, with the restoration of free, safe travel, the niggun spread far and wide. It enchanted hearts with its warmth, soulfulness and lyricism. It even began to outweigh the "Ezkera" in popularity. However, this was in no small part due to the difficulty in singing and remembering the latter, more complex niggun.

It is not a lengthy tune, befitting to an anthem, with easy movement. It can be compared to a gripping story that one cannot put down in the middle of reading. The tune rises in waves from the beginning, and so on throughout its various parts until the end. It is based on a Jewish musical scale. Sung slowly, it contains six parts, some short, some lengthier, which fit together perfectly. The notes were published in many newspapers in Poland, Germany, Argentina and America with many details of the life of Rebbe Yisrael. Once heard, it is not easily forgotten.
*
Here is a link to the niggun as sung by R. Ben-Zion Shenker:

***
*
The niggun has the unique distinction of being sung annually on the Divrei Yisrael's yahrzeit. Those readers in Israel or the NYC area, can attend the yahrzeit seuda Tuesday night, with Ma'ariv at 9 PM in Bnei Brak, or 8:15 in Flatbush, New York.
* 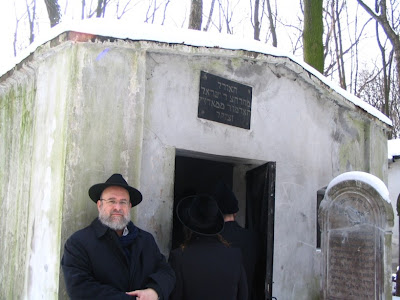 The niggun has also been sung on the rare occasions that the Modzitzer Rebbe and his Chassidim have visited the kever [gravesite] of the Divrei Yisrael in Warsaw, Poland. I was told by those who have participated on such visits that the feelings generated by singing it there are indescribable!